Kay Oliver Schink and his team identifies a new regulator of macropinocytosis, an important mechanism for nutrient acquisition by cancer cells.

3D movie (giffed) of a cancer cell forming macropinosomes. The video was taken on a new advanced light sheet microscope that was recently constructed in the Stenmark lab. Magenta outlines the cell membrane, green shows the localization of the protein Phafin2 during macropinocytosis.

In a recent article in Nature Communications, published online on the 12 of November, 2021, project group leader Kay Oliver Schink and his coworkers in Harald Stenmark’s group at the Institute for Cancer Research and the Centre for Cancer Cell Reprogramming (CanCell) identify a new mechanism how the protein Phafin2 can regulate a process called “macropinocytosis”.

Macropinocytosis – also called “cellular drinking” - is a cellular uptake mechanism. Cells use their actin cytoskeleton to form large vesicles – macropinosomes – which allow cells to take up large amounts of extracellular fluid. This process is important for the immune system. Immune cells – especially dendritic cells, which are the “early warning system” of the body - use this mechanism to scan body fluids for foreign substances. 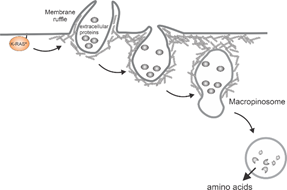 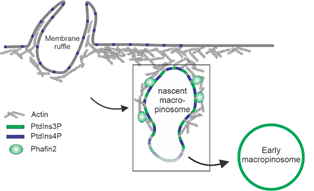 Figure text: (a) Cancer cells can exploit macropinocytosis to take up extracellular proteins which can then serve as additional amino acid source to fuel cancer growth. (b) The protein Phafin2 regulates macropinocytosis by removing the actin cytoskeleton from forming vesicles.

Schink and his co-workers have identified a new regulator of this process, the protein Phafin2. They find that Phafin2 is involved in very early events of macropinocytosis, directly after the macropinosome is formed at the surface of the cell. During this process, Phafin2 interacts with the actin cytoskeleton and allows the newly formed macropinosome to remove actin from its surface to fully enter the cell. Cells lacking Phafin2 show defects in macropinocytosis.

During their studies, the authors found that many cancer types show amplifications of Phafin2, which suggest that this gives cancer cells a growth advantage. To test this hypothesis, they used CRISPR/Cas9 to knock out Phafin2 in pancreatic cancer cells. The Phafin2 knockout cells are not able to use macropinocytosis and show impaired growth when nutrients are scarce.

Schink’s project group is now searching for new regulators of macropinocytosis which can be potential drug targets to disrupt macropinocytosis. This could lead to new treatment approaches for cancer and for other diseases that exploit macropinocytosis, for example newly emerging viruses.