UiO Faculty of Medicine
Main navigation
Back to uio.no
Sub navigation Menu
About the faculty > Innovation > News and events > News > 2018 > Starting a company together after meeting at School of Health innovation
Norwegian version of this page

Starting a company together after meeting at School of Health innovation

"Our product makes it easier to tailor IVF treatment to individual women," says Ana Lobato Pascual, who is starting a company with fellow students from the School of Health Innovation. 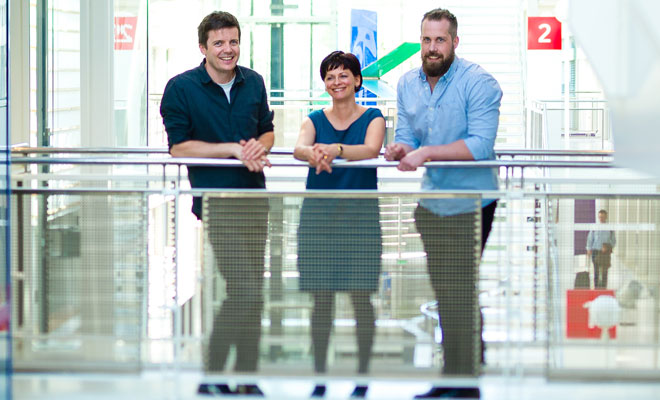 Each year, around 333,000 children are brought into the world with the aid of IVF treatment (in-vitro fertilisation – previously called test tube treatment) in Europe alone, according to the  European Society of Human Reproduction and Embryology’s  data from 2018 (ESHRE). ESHRE estimates that the real figure is as high as 500,000.

"However, around 20 to 23 per cent of IVF treatments must be halted as a result of too high or too low hormone dosage," says Ana Lobato Pascual, who ordinarily works in the Reproductive Medicine Group at Oslo University Hospital.

Together with med Vidar Ulset (UiO), Krister Andersson, (UiO), Mei Ling Lim (KI) and Péter Fedorcsák (UiO/OUS), she is part of the team that is now starting the company IVF Fit.

The company is behind a product that should increase the chances of IVF treatment succeeding.

The School of Health Innovation provided the knowledge and tools they need to get the company up and running.

The School of Health Innovation (HIS)

Met at the School of Health Innovation

The researchers met when they were placed together in a group on an Entrepreneurship in Healthcare course in autumn 2017. Since then, this multidisciplinary team has been selected to take part in the UiO:Life Science innovation programme, SPARK Norway. They are now in the process of registering their company with the Brønnøysund Register Centre.

The School of Health Innovation is a course in innovation and entrepreneurship for Scandinavia’s future physicians and health researchers. The goal is to teach participants how innovation processes work in biotech and medtech companies.

From project to business plan

Here the goal is to create a business plan for one of the participants’ projects. This set them off down the path to market with IVF Fit.

"We would never have managed this if we had not gone on the course, nor would we have even met each other," they say.

Péter Fedorcsák developed the method for ensuring optimised hormone treatment together with Melinda Ráki. Lobato Pascual joined the project in 2014 and has carried out the clinical testing – which was funded by Biotech 2021 (Research Council of Norway).

"When the others joined the project, the patent and proof of principle were already in place, so it was the right time to produce a business plan," says Lobato Pascual.

“I was a bit sceptical at first about spending so much time on someone else's project, but it wasn’t a problem at all. Even if it had not turned into a company, it would have been very useful to work on a real case that was also patented,” says Vidar – the others agree.

Mei Ling Lim – PhD with a background from various stem cell projects. Is a business development analyst at Gnosco AB, which is based in H2 Health Hub, Stockholm.

Péter Fedorcsák – professor in obstetrics and gynaecology, head of the Reproductive Medicine Group at OUS.

On the course they received coaching from Accelerace, one of the largest biotech incubators in Scandinavia.

“We also attended lectures at CBS to learn all the steps in a business plan. It concluded with a pitch session to major industry players, which was very useful. We gained a good understanding of what kind of content investors are looking for. It was really helpful in preparing ourselves for later pitches, such as SPARK Norway.”

They are now hoping to be able to get the treatment into the market soon so they can help increase the chances of women not having to undergo hormone treatment more than once.

“If you can harvest the desired number of eggs after the first round of hormone treatment, it will save the woman from having to undergo this uncomfortable treatment again; it will also be socio-economically beneficial since it costs money to undergo IVF.”

The next round of the School of Health Innovation’s Entrepreneurship in Healthcare will take place this autumn.