UiO Faculty of Medicine
Main navigation
Back to uio.no
Sub navigation Menu
About the faculty > News and events > News > 2016

Christine Henriksen and Hilde K. Brekke share the award for innovation in bachelor and master education for their innovative work in developing the study programme at the recently established Centre for Clinical Nutrition.

The Faculty has given the studies award to Professor Anne Spurkland for her enthusiasm and creativity in her teaching of anatomy and embryology. 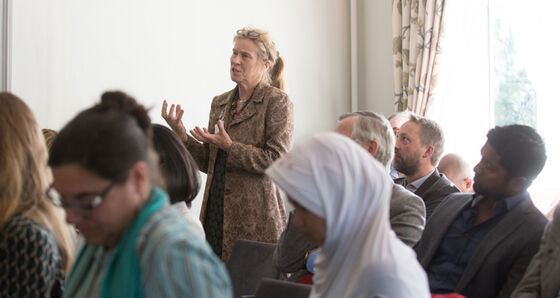 Award for Quality in Bachelor and Master education

The Faculty has given the education award to Professor Johanne Sundby for her outstanding efforts to provide the students at the Master of International Community Health programme with teaching and supervision of excellent quality.

The result of the election for head of institute is clear. From 1 January 2017, Lene Frost Andersen will be head of the Institute of Basic Medical Sciences.

Unn-Hilde Grasmo-Wendler has been appointed to this role on an acting basis since 1 May this year. She thrives on the challenges involved and looks forward to continuing the collaboration with her capable colleagues and partners.

Brodal presents a new edition of ‘The Central Nervous System’

Per Brodal, Professor Emeritus, has issued a new edition of his book ‘The Central Nervous System’, again as sole author. He believes that the book, to be published by Oxford University Press, will also be his last.

22.5 million for UiO from the Norwegian Cancer Society

Core facilities in one place

Do you have some advanced experiments that you dream of conducting? Or do you wish you had an overview of laboratories that can help you with your research? In that case, we can recommend that you visit our new core facilities web pages.

Between one and three per cent of Norway’s population have coeliac disease, and many are undiagnosed. The K.G. Jebsen Coeliac Disease Research Centre opened on 18 August. Here, researchers will develop better treatment and diagnosis of coeliac disease.

New action plan for antibiotic resistance in the health services

The Antibiotic Centre for Primary Care plays an important role in following up the national strategy to reduce antibiotic use in the population by 30 per cent by 2020.

Johanna Olweus and Erlend Strønen have published a new study in the journal Science. The article has attracted widespread international attention and was the subject of a separate commentary article in Science.