Ruth Prince is one of six researchers in Norway who will receive one of the prestigious ERC Starting Grants awarded this year. The project is an anthropological study that will critically explore moves towards Universal Health Coverage by conducting research among policy-makers, bureaucrats and citizens in three African countries. 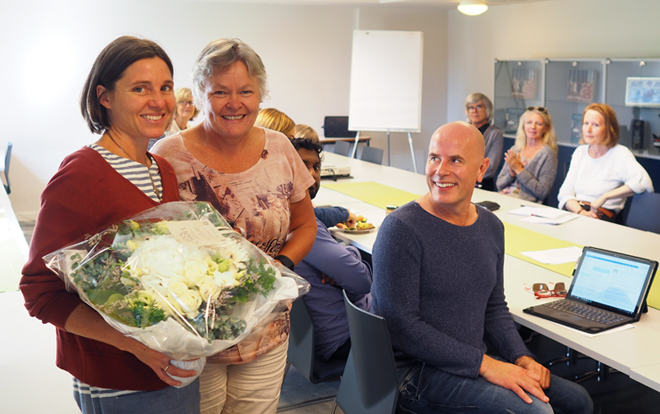 Head of the Institute, Nina K. Vøllestad, congratulates Ruth Prince when it was known that she had received the Institute's first ERC Starting Grant. Photo: A. Kolaas/UiO

Using an anthropological approach, Prince asks different questions from those of health systems researchers, who examine issues of implementation. Among other things, she will explore how apparently universal concepts such as “solidarity”, “welfare” and "the public good" are understood in specific contexts.

I want to find out more about how people perceive Universal Health Coverage and what kinds of pressures different groups place on the authorities, Prince explains.

She will also study how experiments with extending health insurance in Africa may influence social support networks embedded in the family, religious communities and neighbourhoods. Her project will offer insights into the challenges surrounding universal health care and will address the crucial question of whether the progressive rhetoric surrounding this new policy can translate into more robust national health-care systems.

From structural adjustment to collective benefits

Since 2010, Universal Health Coverage has been in focus as an important political commitment by the World Health Organization (WHO). The policy's aim is to ensure that everyone can use the health services they need without this causing financial hardship for the individual.

– In Africa, structural adjustment policies, dominant since the 1980s, have undermined state capacities and promoted privatisation, pushing the cost of health care services onto the poor. Universal Health Coverage is especially interesting in this context, as it reintroduces questions about state responsibilities and collective benefits, Prince says.

Prince will focus on Kenya. The other two countries to be included in the research have not been determined yet. She will recruit a postdoctoral fellow and a doctoral student to her team. Thus, the choice of countries depends on the experience and skills of the researchers who are recruited.

- The plan is to choose one country from Eastern, Western and Southern Africa, because these regions have had different experiences of colonialism, statehood and citizenship. Different countries are also experimenting with varied forms of universal health care services and health insurances, Prince explains.

Supported in the encounter with a bureaucratic EU

Prince recounts that discussing her project application with academic colleagues and getting feedback helped her to develop the idea into a solid application. She had been contemplating an application for a while, but chose to wait until the idea for the project had matured.

– I think the ERC scares some applicants away by emphasising innovation and excellence in research requirements. Of course these are important, but the actual application is still similar to other applications that researchers are used to writing, Prince says.

She was nevertheless a bit put off by the bureaucracy around the application and therefore appreciated all the support she received from the research administration at the Faculty. They helped her fill in forms during the application process and negotiate an agreement once she got the award, and they gave valuable advice.

Head of Institute Nina K. Vøllestad is proud that the Institute of Health and Society has received its first ERC Grant.

- This projects fits well within our strategic focus on global health research. Ruth Prince has developed a timely and ambitious project of a very high quality. The research is an important contribution to her academic discipline, but it also provides knowledge that can be used as a basis for shaping health policy locally and internationally, Vøllestad says.

The European Research Council (ERC) is the flagship of the EU's framework programme for research, Horizon 2020. Prince was awarded a grant from the Social Science and Humanities ERC Panel SH5. The competition for ERC grants is especially fierce, and being awarded a grant is a great achievement. The selection process is demanding, with both an evaluation of the project and an interview in Brussels.

The success rate for the Starting Grant is about 11 per cent, and only the strongest candidates with the best ideas succeed. The grant from the European Union is for 1.5 million euros over five years