Bacteria use their own pumps to collect magnesium

Researchers at UiO and NCMM have discovered that the system used by bacteria to transport magnesium is so sensitive that it can detect a pinch of magnesium salt in a swimming pool. 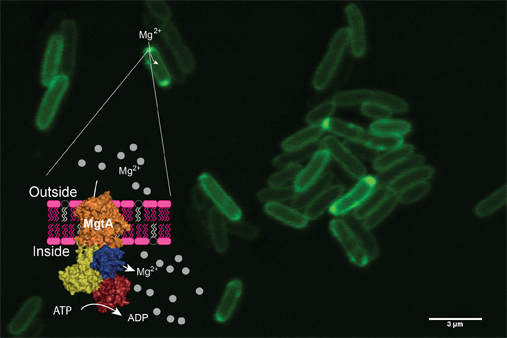 The bacteria are shown in green. The multi-coloured area shows how the pump rests on the bacterial membrane (pink). The ‘machine’ itself inside the membrane is shown in orange. The grey dots are magnesium atoms. Photo: Jens Preben Morth, UiO

Magnesium is a mineral found in all living organisms. Your body contains 20–30 grams of this element, most of which is in the skeleton. We humans are supplied with magnesium through our daily diet or as a supplement.

Magnesium deficiency is not especially common, but occurs in patients with intestinal diseases such as Crohn’s disease. These patients often have to live with cramps and various rheumatic illnesses. Other symptoms typical of magnesium deficiency are muscular spasms, cramp, anxiety or abnormal heart rhythms.

Researchers at NCMM, the Centre for Molecular Medicine Norway at UiO and Oslo University Hospital have shown exactly how sensitive the bacteria’s transport system is.

– We have identified a nano-sized magnesium pump.

The researchers manipulated an E. coli bacterium so that it overproduced using its own magnesium pump.

– The pump was isolated in the bacterium’s cell membrane.

There are different methods of achieving this type of isolation. We could either divide up the proteins according to size, or we could examine the positive or negative electric charges of the proteins on the surface of the pump.

– As soon as the pump was isolated, we were able to work with the pure protein without disruption from other proteins, Morth explains.

With the aid of enzyme kinetics, a special method of analysing chemical reactions, the researchers were able to obtain a calculation of the sensitivity to magnesium.

Magnesium deficiency can be deadly for bacteria. This has led to our own cells developing a mechanism that removes magnesium and other metals from bacteria when they start to attack us.

– In order to counteract this mechanism, the bacteria have developed a unique system to detect and attract magnesium. The bacteria manage to do this even if the amounts of magnesium in their environment are only minimal, says Morth.

Magnesium is bound to several proteins within a cell. It is used by many of the enzymes that are involved when sugar is broken down into energy. This process is known as glycolysis.

May contribute to development of drugs

In answer to the question of why the finding is significant, Morth explains:

– This discovery will help us to understand some of the molecular systems that apply when magnesium is identified and absorbed into cells. Not only in the case of bacteria, but also in more advanced organisms.

In future we may be able to use this to create drugs that counteract this process and thus prevent antibiotic resistance, for example. In addition, it will help us to understand how bacteria protect themselves against the hostile environments in the human body.

Examples of this might be the acid environment in the stomach, or so-called macrophages, which are cells that digest bacteria and cellular debris.

We envisage that further studies can be used to develop biological sensors for magnesium, Jens Preben Morth concludes.

This article is based on the paper The magnesium transporter A is activated by cardiolipin and is highly sensitive to free magnesium in vitro publisert i elifesciences.