– Candidates are able to develop skills in world-leading research communities, and then join us and enrich our community with expertise that we have a specific need for, host Tom Hemming Karlsen says. 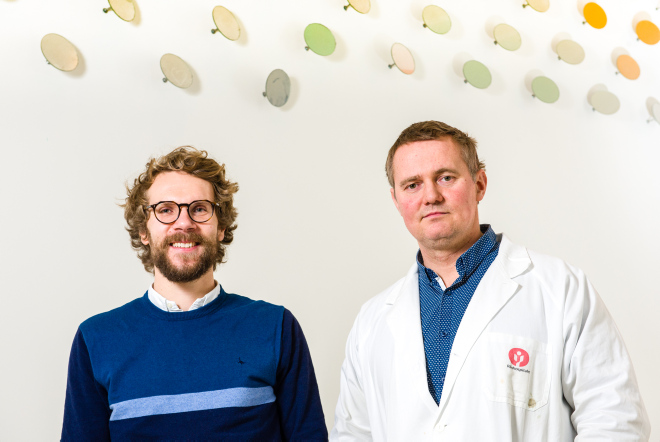 – Why did you decide to be a Scientia Fellows host?

Our group wanted to be a Scientia Fellows host for several reasons. For a start, the Marie Curie umbrella programme has a high status, and acts as an attractive recruitment tool. We wanted to use the prestige attached to the Marie Curie programme to entice talented foreign researchers to Norway. There is also an economic aspect to hosting in terms of gaining added value from our resources. The forty per cent that Scientia Fellows adds to our existing funding means we get more research for our money.

– What projects are your candidates working on?

We currently have two candidates who are working on different projects. One candidate is following up a large gene study we have carried out. In the study we identified a gene that is common to patients with PSC, inflammatory bowel disease and Bechterew’s disease, and is also found in populations throughout the world. The candidate was appointed to carry out further studies on this gene.

The other candidate is working on immune response in patients with PSC. We have proved that PSC is an autoimmune disease, and the candidate’s aim is to identify what it is that the immune system reacts against.

Read more interviews with fellows and hosts at the Scientia Fellows programme!

– How does participating in Scientia Fellows benefit you and your research group?

The key advantage, we believe, is the opportunity it provides for the transfer of knowledge and methodologies. Candidates are able to develop skills in world-leading research communities, and then join us and enrich our community with expertise that we have a specific need for.

– Who is suited to being a postdoctoral fellow in the Scientia Fellows programme?

Ambitious researchers who will gain useful experience by working at other institutions, and whose life situation lends itself to traveling. In general, I would encourage more Norwegians to seize the opportunity. During the recruitment process, it was a little disappointing to see that so few good Norwegian candidates were willing to study abroad at highly prestigious partner institutions. The two candidates we have recruited to date have travelled from Austria and Canada respectively, first to England and then to Norway. Both candidates brought their wives with them. I would like to see more young Norwegian researchers willing to embark on such an adventure, and to recognize that this can be done with their family.

– Who do you recommend could be a host?

Anyone who has a desire to enrich their research community with knowledge or methods that they otherwise would not have learned. It is, however, important to understand that the recruitment process is time consuming. We have had many candidates dropping in, numerous meetings – both in person and via Skype – and we have also had to travel to partner institutions. Hosts must be willing and able to put in the work required to get the best candidates. I believe that doing so is well worth the effort.

– What effect has your participation in the Scientia Fellows programme had on your recruitment of candidates?

I believe that the Marie Curie stamp has been vital for recruitment. Without the mark of distinction that the stamp carries, the standard of candidates would not have been as high. The candidates were willing to undertake a fairly demanding trip to Europe, which I do not believe would have been the case without the EU recognition. This is also something that the candidates will eventually be able to add to their CV.

– How does participating in Scientia Fellows benefit postdoctoral candidates?

First, they get the opportunity to work at two excellent laboratories during one postdoctoral period. One postdoctoral candidate said it was tantamount to getting two for the price of one; they get twice as much experience as is normally the case. Working with the project in more than one place also makes it possible to combine different methods and approaches, thereby improving the standard of articles produced. The mobility aspect of the programme also provides an opportunity to create independence as a researcher by breaking away from the institution where they attained their first degree. Some candidates also no doubt see it as an opportunity to live in another country. For others, the idea of returning to their homeland with all the experience they have gained can be rather appealing. We hope we manage to keep our two candidates for as long as possible after they come to Oslo.

Read more interviews with fellows and hosts at the Scientia Fellows programme!