Bacteria without Borders – Experiences from the CGH seminar at Arendalsuka

The Centre for Global Health joined the UiO boat at Arendalsuka with a strong team of researchers from Institute of Health and Society. 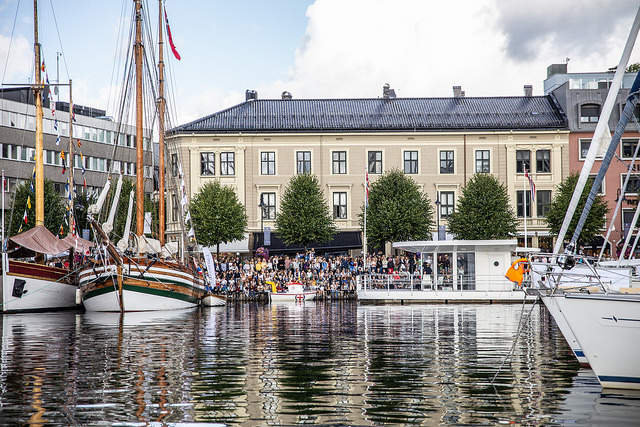 The Centre for Global Health (CGH) hosted a morning seminar entitled “Bacteria without borders”. The emergence of antimicrobial resistance (AMR) in humans, animals and the environment is a major global challenge that requires global solutions, like the ones presented by the One Health approach. The seminar was co-hosted by Medicine Sans Frontiers Norway (MSF), represented by Karine Nordstrand, the president of MSF in Norway.

Kristian Rødland, an infectious disease specialist and post-doctoral fellow at the Institute of Health and Society (HELSAM) introduced the topic of AMR from a medical and

biological perspective. Rødland covered the emergence and spread of antimicrobial resistance and how it is increasingly a problem on a global scale, both in humans and animals:

“A research group took samples from seagulls in Greenland, Siberia and Alaska and found AMR in 10 percent of the samples. We don’t know how this happened, but it is very unlikely that these birds have been treated with antibiotics”, says Kristian Rødland.

Osama A. H. Ahmed, also a post-doctoral fellow and One Health epidemiologist at HELSAM,  spoke about the environmental aspects of AMR. It may be easy to underestimate the interaction between humans, animals and the environment. ”We all share the same biosphere”, Osama reminded the audience. Besides AMR emerging from over-prescription, the use of antibiotics in agriculture and domestic animals are in some settings even bigger than the use in human medicine, and pharmaceutical waste is another big contributor to emergence of environmental AMR.

Both Kristian and Osama are a part of the CGH One Health Signatory Theme, lead by Andrea Sylvia Winkler, Director of CGH and Professor at HELSAM.

Stepping outside the research perspective, Karine Nordstrand gave a presentation focusing on her experience in the field working for MSF. AMR is responsible for complicating patient treatment. A simple infection that Karine used to treat with antibiotic tablets, now requires more advanced treatments and sometimes hospitalisation. This makes treatment more expensive and less accessible to many patients in poor resource settings, like those MSF works in.

Norway is already a large contributor of global funds towards preventing and building preparedness and resilience towards infectious diseases and potential epidemics, with investments made through CEPI (link). The problem of AMR and the potential risks it poses to the health of the global population is another extremely important challenge that requires for academics, clinicians and governments to work together towards a solution.

The seminar closed with a panel and a discussion of the role Norway can play globally in combatting AMR. The panel consisted of the three presenters and joined by the Vice-Dean Per Morten Sandset from the Medical Faculty, University of Oslo (UiO) and Tuva Moflag, a parliament politician from The Norwegian Labour Party (Arbeiderpartiet).

The panel discussed the practical and theoretical solutions and approaches for combatting AMR. The audience was engaged and curious, offering their perspectives on the topic and asking questions regarding the responsibility of the pharmaceutical industry, development of novel antibiotics and investment of resources into AMR, especially in the Global South.

Tuva Moflag showed a big commitment to the field and aspired to place AMR higher onto the political agenda in Norway, “Climate change is a global challenge now on the agenda, because of the warm weather this summer, but I believe AMR is also a very important global challenge we need to put higher on the agenda in Norway”. She also promised to ask the Ministry of Health about the role and participation of Norway at the UN General Assembly High-Level meeting on ending resistance in tuberculosis (TB), which takes place in New York in September. In 2016 more than 490,000 people developed multidrug-resistant TB, and TB is thereby one of the biggest contributors to AMR-related deaths.

Centre for Global Health hope the session brought new aspects and reflections to the audience and look forward to continuing the discussion on the global problem of AMR.