Report: Sexual Violence as a Weapon of War: Reflections on the 2018 Nobel Peace Prize

Report from PRIO seminar on Sexual Violence as a Weapon of War: Reflections on the 2018 Nobel Peace Prize, 11 December 2018 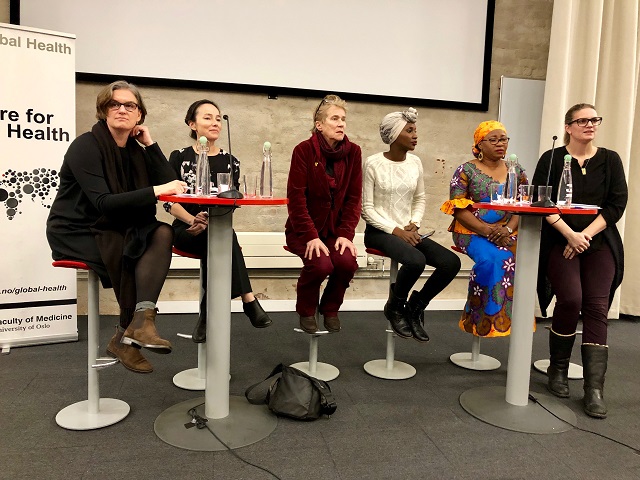 Dr Henrik Urdal, director of the Peace Research Institute of Oslo (PRIO) introduced the seminar, reiterating the messages of the Nobel Laureates Dr Mukwege and Nadia Murad: to end impunity for perpetrators and to appeal to prevent sexual violence, to end atrocities currently occurring in Iraq and the Democratic Republic of Congo. Dr Urdal welcomed Pramila Patten, United Nations Under-Secretary-General (UN USG) and Special Representative on Sexual Violence in Conflict to speak.

The Nobel Peace Prize shines a spotlight on what is often described as history’s most silent and least suppressed crime, and encourages survivors to speak up. Sexual and gender based violence (SGBV) perversely brings blame and stigma upon the victim rather than the perpetrator, resulting in social exclusion. Fear of this stigma results in chronic underreporting, and thereby pervasive impunity. UN USG Patten emphasised the demands made by Nobel laureate Nadia Murad to hold perpetrators to account, highlighting that no perpetrator from ISIS or from Boko Haram had been prosecuted for this crime. Her work with prosecutors reveals that laying charges for affiliation to terrorism is viewed as less challenging than charges for rape. As a consequence, there is no historical record, or retribution for the crime committed. Calls to prosecute are unfortunately met with resistance, that the prosecutions disrupt peace, are difficult or expensive. This aborts the role of justice in facilitating healing, closure, or even transformation.

Dr Urdal introduced the keynote speaker, Dr Christine Amisi, doctor and researcher, at The International Center for Advanced Training(ICART)/Panzi Hospital. Up until October 2018, the Panzi hospital has treated over 54 000 survivors of SGBV, of which around 4% were under ten years old. SGBV has significant consequences: approximately 90% of survivors are affected by hepatitis B. If placed in internally displaced person (IDP) camps, 70% of women will again be victim to SGBV. Around one in five survivors report SGBV to health facilities. As a reaction Panzi hospital has created the model of the One Stop Centre for reproductive health, providing medical care as well as psychosocial support, legal and economic assistance for reintegration into society. Dr Amisi’s group is currently undertaking research with PRIO into the impact of such economic support programmes, and results are positive for both social inclusion and socio-economic resources for survivors. Dr Amisi reflected on the drivers of SGBV, for example, electoral fraud has often triggered violent protests and civil unrest, characterised by increased sexual violence.

Dr Ragnhild Nordås from the Peace Research Institute Oslo (PRIO) reflected on the decade since the UN Security Council Resolution 1820 on women, peace and security. In some countries, the prevalence of SGBV has remained stable or even continued, while in other areas, SGBV has increased. States (including armed forces and police) and other armed groups are among perpetrators. Nevertheless, some armed groups manage to control their troops, showing that SGBV is avoidable. Inger Skjelsbæk, Associate Professor, Department of Psychology at the University of Oslo pointed out that armed groups such as Boko Haram are employing SGBV as a deliberate tactic in line with extremist ideology. Prevention is imperative, requiring a shift in male cultures, especially among armed forces.

Professor Johanne Sundby from the Centre for Global Health, University of Oslo emphasised that SGBV is an everyday occurrence, that is then exacerbated by conflict. UN USG Patten reiterated Nobel Laureate Nadia Murad’s calls for increasing comprehensive services for survivors. There is a significant gap in mental health and psychosocial support, observed in survivors who present clear symptoms of post-traumatic stress disorder. Doctoral candidate Cynthia Wangamati, Centre for Global Health, University of Oslo described challenges faced by SGBV survivors, with reference to her research in Kenya. Survivors may meet closed health services, and are often charged out of pocket costs for essential services such as emergency contraceptives. If a patient cannot afford such contraceptives and abortion is criminalised, this often result in either unwanted birth or unsafe abortion, with associated risks for mother and child. Psychosocial support is often lacking, and victims often face blame at health services. Police corruption fuels further impunity when bribes are accepted from perpetrators.

Kim Seelinger, leader of the Sexual Violence Program at the Human Rights Center at Berkeley School of Law discussed legal dimensions of SGBV prosecution. The International Criminal Court has faced difficulty to prove individual responsibility in key cases of mass incitation to rape. While the act may not be denied, the link to the responsibility may be difficult to prove. Seelinger called for stronger mechanisms at national level to prosecute perpetrators. Nobel Laureate Dr Mukwege has suggested a victim’s reparation fund to break the cycle of poverty and SGBV. Given that few cases are prosecuted for committing SGBV, reparations in economic support are the most significant way to make a difference. Seelinger noted that individual versus collective reparations need further attention to be implemented. Seelinger also called for training of medical staff to improve knowledge of how to collect evidence that is admissible in a prosecution for SGBV.

A debate was held in which panelists discussed the importance of availability of One Stop services, rather than fragmented services, which can effectively hinder access. The need to decrease stigma against survivors was highlighted, with reference to community-based programmes such as Sasa in Uganda. Panelists reiterated that prevention remains the priority in SGBV. Importantly, without disclosure, there is no accountability, treatment, prosecution or reparation. Researchers have a role in analysing barriers to disclosure or recourse to support. The need to train journalists was discussed, in particular, the need to better protect survivors and clarify which details will be disclosed to avoid further stigmatisation. Professor Andrea Winkler, Centre for Global Health, University of Oslo, closed the seminar, emphasising that men are part of the solution. Sexual violence is occurring every day in all settings, and systemic change is needed to prevent SGBV and manage the consequences.

Read about and listen to the seminar here