The King’s Medal of Merit was awarded to Dr. Tore Godal in recognition of a lifetime achievement in immunization and global health on November 23, 2019. 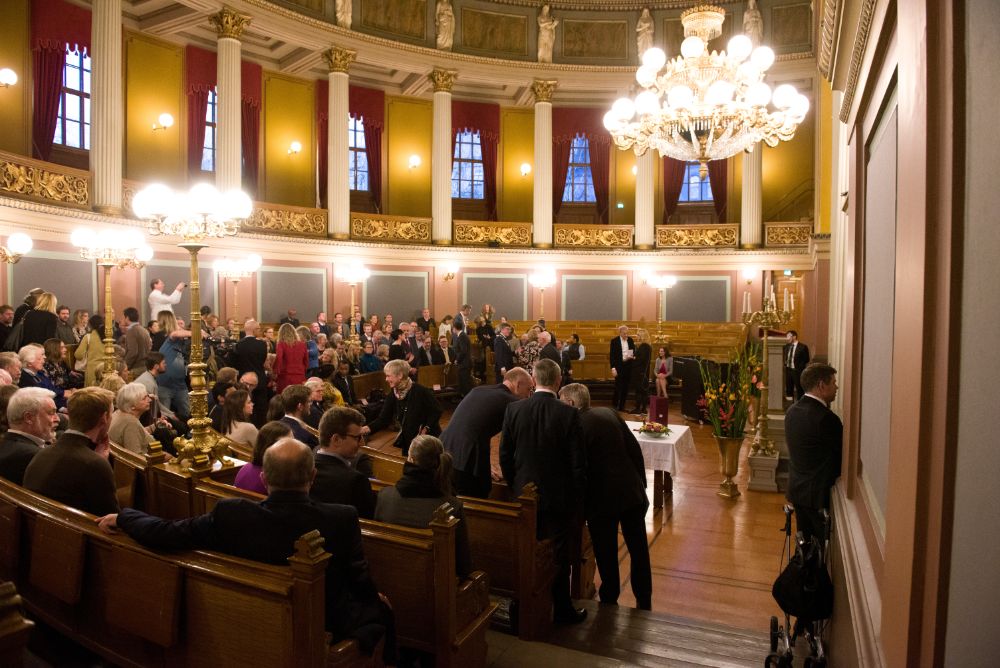 Dr. Tore Godal's lifelong career has been devoted to reducing child mortality and saving millions of lives through initiatives, such as the widespread introduction of mosquito nets in Africa resulting in reduction of malaria mortality rates by 50 percent and saving half a million children’s lives every year. Including, his work in the Gavi Alliance leading to the vaccination of 750 million children, saving 13 million lives.

Dr. Godal is originally from a small mountain village of Rauland in Telemark consisting of only 1500 habitats. Soon after defending his PhD, he embarked on a journey to a leprosy hospital in Ethiopia where he found his calling for saving lives. From 1970 to 1972, he was the director of Armaur Hansen Research Institute in Addis Ababa. In 1994, working at the World Health Organization, he organized a massive clinical trial to test insecticide-impregnated mosquito nets, which resulted in saving, and continues to save millions of lives. His leadership in GAVI during the 2000s, earned 750 million USD from the Bill and Melinda Gates Foundation towards vaccination programs for children living in poverty. Since 2005, as a central figure in Norway’s leadership in global health, he contributes to the establishment of the Health Results Innovation Trust Fund at the World Bank funded by Norway and the U.K. supporting 36 programs in 31 countries. Presently, at the age of 80, he continues his service at the Norwegian Institute of Public Health.

The seminar focused on lessons learned from the last 49 years of global health as well as driving factors for shifting priorities from the Millennium Development Goal to the Sustainable Development Goals (SGDs) era and future of priority setting. The seminar began with an opening speech including a summary of events by Camilla Stoltenberg, Director-General of Norwegian Institute of Public Health. Dag-Inge Ulstein, the Norwegian Minister of International Development, continued the seminar by quoting Dr. Godal, “if you want real progress then you have to find real problems.” He continued to discuss some of the main issues of global health highlighting facts such as non-communicable diseases, NCDs, being the leading cause of 70% of deaths and only receiving 10% funding. This coincides with the event the evening before, launching the new, non-communicable disease strategy of Norway (live stream of event).

The seminar continued with presentations made by Dr. Godal’s colleagues exploring past and present issues of global health. Key speakers included:

Agnes Binagwaho, Vice-Chancellor of the University of Global Health Equity, Rwanda, and former Minister of Health of Rwanda made a keynote speech about challenges in progress of the sustainable development goals, SDGs, and the need for increased and sustained funding for universal health coverage.

A panel moderated by John-Arne Røttingen, Chief Executive Officer, Research Council of Norway, discussed what is needed to deliver better healthcare, barriers going forward with SDGs and the history of public health programs. Ideas such as the importance of the country’s government participation in health interventions, improvement of clinician’s training, development of trust in healthcare systems as well as evidence and equity-based focus were some of the key topics of discussion. The panel consisted of significant healthcare personnel including:

In Gamle Festsal, the exact location where Dr. Godal defended his PhD in 1967, influential global health leaders and supporters of his work joined in honoring Dr. Godal with the King’s Medal of Merit award.

In the opening speech of the ceremony, Svein Stølen, Rector of the University of Oslo, explained Dr. Godal’s life as a, “story of what one single and determined person can achieve,” highlighting that his actions spoke louder than his words.

The Norwegian Minister of Foreign Affairs, Ine Marie Eriksen Søreide and Secretary General of NATO and former Prime Minister of Norway, Jens Stoltenberg praised Dr. Godal’s hard work. Key quotes describing Dr. Godal included, “he is the Norwegian who has saved the most lives” and “his achievements (have) lead him to become the world's district medical doctor.” The message from the WHO Director-General, Dr. Tedoros Ghebreyesus stated, “Tore Godal is a giant of public health and one of its unsung heroes.”

The award of the King’s Medal of Merit was presented to Dr. Godal by Marianne Aasen followed by a standing ovation from the audience. In Dr. Godal’s short speech, he shared his gratitude towards the Norwegian government, the Royal Family and the collaborators of the event.

The program concluded with a music performance of a young string quartet, Kvartett Saphir followed by a conversation between Dr. Godal, Jens Stoltenberg and Anne Grosvold.