The Centre for Global (CGH) at the University of Oslo (UiO) attended Norwegian University of Science and Technology’s (NTNU) 10th Global Health Day. 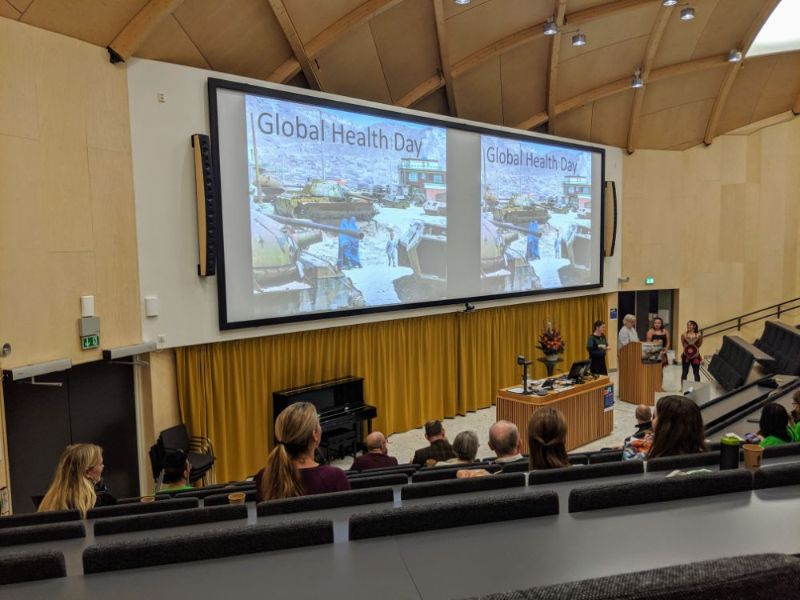 This conference has been arranged every fall since 2010, with both national and international speakers and participants. This year, Global Health Day at NTNU focused on malnutrition as a global challenge and humanitarian interventions in conflict areas.

The conference began with a warm welcome from Bjørn Gustafsson, Dean of the Faculty of Medicine and Health Sciences and Elizabeth Darj, Professor of Global Health, NTNU. Their welcome speech highlighted the current situation of living in a world of transition with major challenges to Global Health. Two master students followed the welcome speech with an exciting traditional dance performance. Håkon Bolkan, postdoctoral fellow, Department of Clinical and Molecular Medicine, NTNU moderated the first half of the conference focusing on one of the two main themes of the today, humanitarian interventions in conflicts and hosting a panel of the international experts.

Mads Gilbert, medical doctor at the University Hospital of North Norway and Professor at the University of Tromsø (UiT), the Arctic University of Norway presented on his work and time in Gaza, occupied Palestine. The Palestine-Israeli conflict was the forefront of his presentation and his view as a political doctor providing humanitarian aid in a location where medical and political issues merge. His presentation captured the horrific reality of this conflict and the absence of emergency humanitarian aid on the ground, delivering urgent assistance.

Kyrre Lind, head of the program department for Doctors Without Borders, Norway presented the work of the organization and the dedication to providing critical lifesaving assistance to people worldwide who have fallen victim to natural or manmade disasters including armed conflict. He focused on the importance of bridging the emergency gap, specifically in conflict areas, and how use of Nexus (Humanitarian-Development-Peace Nexus) is affecting humanitarian action. He also introduced a new method of work known as the New Way of Working (NWOW). This new approach is context specific and involves humanitarian, development, and peace actors working collectively.

Professor Justine Davies from the University of Birmingham, Institute of Applied health Research, UK presented on the quality of care in a vulnerable health system. She discussed the issue of defining a vulnerable health system and how alone, this is very complex. The research she focuses on is research that informs development of health systems that deliver quality care in low and middle-income countries. She demonstrated that through research she measures the health of the population and the health system that serves them from many different angles; from epidemiological, qualitative, systems-readiness and economic perspectives.

Simon Stanford is a journalist and creator of Afrika Select, a platform for sharing knowledge and commitment of reporting globally from the last 30 years. Stanford presented a stimulating presentation with photos, video clips and personal experiences of being a journalist during significant, political events. He discussed the relations he witnessed between different actors during conflicts and how being a journalist presented him with difficult scenarios. During his presentation he kept coming back to the question of whether his work during these conflicts were relevant and concluded it was as long as it made a difference.

The second part of Global Health Day focused on nutrition and the global challenges it faces. Different forms of malnutrition have significant health and economic costs for both developing and developed countries, and tackling malnutrition is a global public health priority.

Professor Lars Åke Persson, pediatrician and epidemiologist from the London School of Hygiene and Tropical Medicine started the second part of Global Health Day. His presentation focused on child nutrition and development within a global perspective and questioned whether we are doing the right things. He opened with an interesting study from the early 1900s in Sweden where infant mortality was much higher in one region of the country compared to the country as a whole. He explained the findings from this study were to be explained by the lack of breastfeeding and how a breastfeeding campaign within this region later succeeded in lowering infant mortality rates. He continued to relate this to his current research, which entails community-based interventions for child health and survival and prenatal nutrition interventions, mostly in the East Asia and Pacific region and Sub-Saharan Africa.

Usman A. Mustaq, advisor to the Minister of Health, Pakistan and Trustee of the EAT Foundation in Norway presented his contributions to the EAT-Lancet Commission on healthy diets from sustainable food systems. The EAT-Lancet Commission on Food, Planet and Health involved 37 world-leading scientists from across the globe to answer one question, ‘Can we feed a future population of 10 billion people a healthy diet within planetary boundaries?’ Based on the findings and report recently published the simple answer is yes, however to do so there must be a transformation in eating habits, improvements in food production and reduction of food waste. The EAT-Lancet Report is the only full scientific review of what comprises a healthy diet from a sustainable food system and the necessary actions to transform the food system. The full report can be found here.

Lena Maria Nillson, project coordinator at the Arctic Research Centre at Umeå University, Sweden presented her work on food sovereignty in the Arctic and the current dilemmas of modern times. She wore traditional Sami clothing known as gákti and discussed the traditional Sami lifestyle related to diet. Her work focuses on the temporal changes in these Arctic lifestyle factors from a food security perspective.

Eleni Papadopoulou, researcher at the Norwegian Institute of Public Health, Norway discussed maternal nutrition in a modern world and questioned whether the changing diets are creating new risks for babies. She discussed the effects of perfluoroalkyl substances (PFASs) and its association on the health effects of children. She explained PFASs as a group of manufactured chemicals that have been found to be very persistent in the environment and in the human body. These chemicals have a hard time breaking down and can accumulate over time causing adverse effects. This presentation provided a better understanding of the role of diet in shaping fetal outcomes.

Prudence Atukunda, PhD candidate at the University of Oslo (UiO) presented her current project on the effects of early nutrition, hygiene and stimulation education on gut microbiome for child development and growth in western Uganda. This project is one of the winners of the RELIGHT program and she presented her work at UiO’s Global Health Inspiration Days this year. The project originates from a randomized trial conducted among mothers and their small children (6-8 months) in rural Uganda in 2013-14. The main aim was to test if maternal education encompassing aspects of nutrition, hygiene and stimulation would improve child growth and development outcomes. At ages 2 and 3 years, growth was only minimally affected, but the children from mothers in the intervention group scored far better on measures of cognitive, language and motor functions.

On behalf of the Centre for Global Health, UiO we would like to thank NTNU Global Health for organizing Global Health Day and delivering a fruitful program with leading international experts.

By Gabriella Rodriguez
E-mail this page