Acknowledging the enormous progress when it comes to polio and the Polio Endgame Strategy 2019-2023, the Global Health Centre (GHC) at the Graduate Institute of International Development Studies and the Norwegian think tank, Agenda, in association with the Centre for Global Health, UiO, held a high-level policy dialogue with an expert panel. 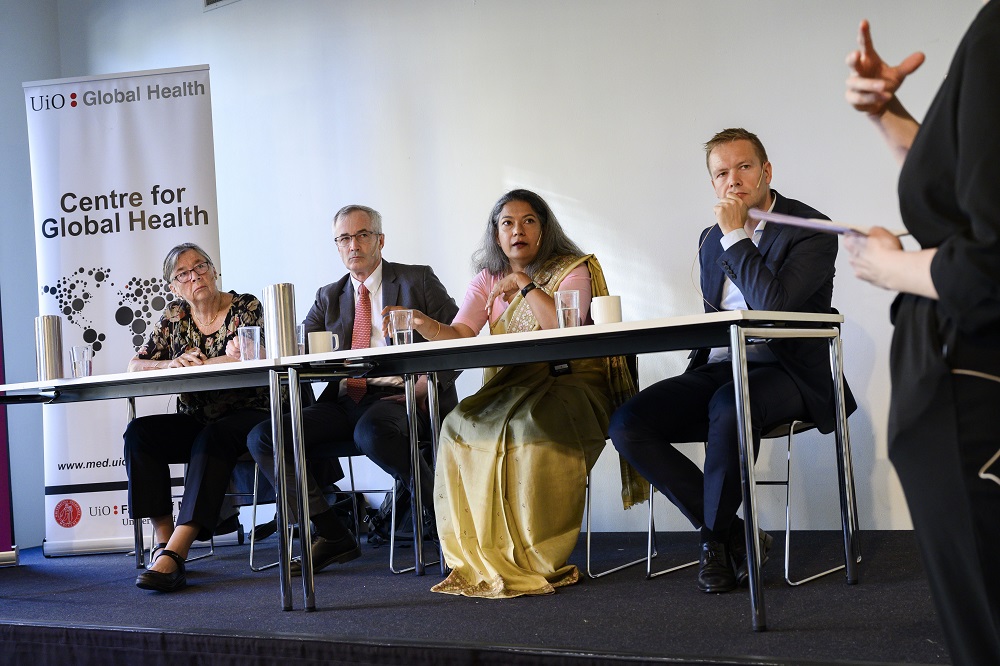 More than 50 people met at Litteraturhuset, on September 12, 2019 to discuss the status of polio, the final hurdles towards eradication and the efforts needed to sustain a polio-free future. A panel of experts was present to provide an update and further explain their planned actions in moving forward with eradicating polio.

The moderator, Sigrun Aasland from Agenda, started the meeting by referring to the importance of development and public health work. She noted there is often a double challenge, with targeted efforts to reach specific results being accompanied by the need for broader institution building, especially in developing countries. With polio being the central focus of discussion, the following questions were addressed;

1. Why has the fight against polio been a success so far?

2. What are the challenges remaining today and what is needed to reach the goal of eradication?

3. What can we learn from polio eradication and is it transferrable to other areas in global health?

4. How do we balance targeted efforts and long-term institution building?

The keynote speaker, Stephen Matlin provided a brief history of polio eradication, with the establishment of a global polio eradication initiative in 1988 by the World Health Assembly, following an initiative from Rotary International in the 1980s. At that time, an estimated 350,000 cases a year of polio were occurring in 125 countries worldwide. By the target date of 2000, that number had been reduced by more than 99 percent. Since then, the journey of removing the last cases of polio has proved to be a very complicated and difficult process. In 2007, the remaining cases caused by the wild poliovirus (WPV) were contained within four countries. India saw its last WPV case in 2011 and Nigeria in 2016. As of today, Afghanistan and Pakistan are the two remaining countries with endemic WPV and last year, 33 cases were detected and 73 cases so far this year. The issue that remains today is not a fundamentally technical one, but rather the challenge of accessing people in some of the most dangerous and hostile territories of the world and ensuring every child receives polio vaccination. As the end of polio nears, a significant complication is that the eradication programme requires the use of a live, attenuated virus in the oral polio vaccine (OPV) and eventually this will need to be replaced throughout the world with an injectable, totally inactivated polio vaccine (IPV) to prevent vaccine-related infections occurring. Another challenge is the ongoing expense of polio eradication as it moves through the endgame, as donors balance priorities between existing and newly emerging concerns within global health. Norway has been and continues to be amongst the world’s leading investors in polio eradication, as well as a strong political voice for the cause, and in general for vaccinations/immunizations.

For this seminar, the panel consisted of:

Is Polio a Success Story?

Polio can be described as a “success story”, with millions of children and adults having been protected from death or lifelong disability. However, the panel agreed that it is not quite over and efforts still need to be made in order to reach eradication, which will only be achieved when there are zero cases.

Aksel Jakobsen explained that Norway’s fight against polio continues and the current focus is on two main areas; 1) to implement the use of IPV for polio prevention in routine immunizations systems worldwide; and 2) to work with WHO on the polio transition agenda which will ensure that the systems and trained personnel developed for polio are used in the future for other health areas.

Sona Bari reflected on how much has changed since the polio eradication initiative began in the 1980s – including on social, political and technological levels. She acknowledged that it is important for polio eradication to be seen in the context of this movement. WHO’s strategic plan towards eradication includes the continuation of using proven, time-tested tools as well as new ideas to improve and integrate services, especially in the hard-to-reach areas within Pakistan and Afghanistan.

The world has made enormous progress in relation to polio and much can be learned. Jay Wenger acknowledged the Global Polio Eradication Initiative (GPEI) and its five core partners (United Nations Children’s Fund (UNICEF), WHO, Rotary International, US Centers for Disease Control and Prevention & the Bill and Melinda Gates Foundation) as playing extensive, but very particular roles. Having these large organizations use their individual expertise has allowed the programme to innovate and strategize to work efficiently towards one goal. This large collaboration has shown that tackling epidemic diseases like polio can work.

Bari shared a humbling lesson by acknowledging that medical science is key, but this is not the only factor that determines success. It is also about the community’s needs and wants, and therefore, other determinants within public health are of great importance too. In her time at WHO she had seen an increase in the involvement of non-medical disciplines and inputs from experts such as social and cultural anthropologists, which are vital for advancing public health goals.

Obvious challenges for polio, particularly in the last two remaining countries, include the difficulties of reaching conflict areas and overcoming geographical barriers. Another challenge is the movements of populations, including children on the move who become the most vulnerable. In addition, Bari also considered that one of the largest challenges is the ability to provide quality service and care. She observed that eroding community trust and faith is a result of not providing adequate care and can be detrimental to the attitude to the polio programme on the ground, specifically in communities of Pakistan and Afghanistan.

Sigrun Møgedal concurred with Bari about the importance of not losing the trust of people within the communities where the polio programme is currently working, so that this remains a major challenge. When asked what is the best technique to tackle polio through linking with other mainstream health issues, Møgedal suggested that the question should be, how the work on these other health issues – such a primary healthcare, universal health coverage and the sustainable development goals – can assist with the end of polio. It is important to remember the context in every country is different and the process and maintenance of tackling polio differs between countries. Therefore, full understanding of these areas is necessary and what the community needs should be a top priority.

Overall, the panel indicated its strong optimism for the eradication of polio, seeing it as  a true success story already, but with the current priority being to achieve complete global eradication and then keep it a success story in perpetuity.