In this Uniforum article (directly translated), Espen Bjertness, Professor and Head of UiO's research collaboration MY-NORTH in Myanmar, provides a status update with ongoing projects and the current political conflict in Myanmar. 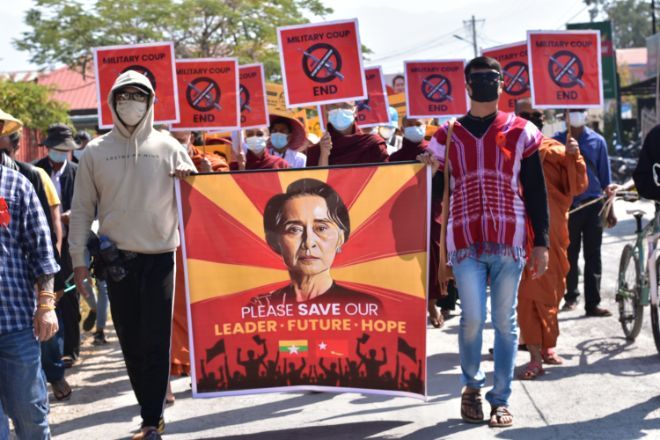 Since 2009, the University of Oslo (UiO) has collaborated with universities in Myanmar, which is now in a turbulent time after the military coup that took place on 1 February. Professor Espen Bjertness at the Department of Community Medicine and Global Health leads the project, MY-NORTH: Health and Sustainable Development in Myanmar. The project has among other things, trained doctors from Myanmar at the PhD and master's level in basic medicine, epidemiology, non-communicable diseases, mental health, partner violence and maternal health. The project has also played an important role in the establishment of the country's digital health information system (DHIS2), contributing to the development of digital learning resources and general strengthening of the country's health systems. It has also resulted in a number of publications in leading journals such as Nature and The Lancet.

"Norad has granted money to continue the project until 2026, but now there are new considerations to take. The large-scale demonstrations against the military coup that are taking place throughout Myanmar and the region were started by publicly employed health personnel, academics, medical and nursing students, and the support quickly spread to other disciplines. I support my medical colleagues in Myanmar, and at the same time I want to continue to contribute to better public health in the country. In solidarity with the population and colleagues, this means that the project must be put on pause."

The military authorities in Myanmar have taken control of the country and placed the elected leader, Peace Prize winner Aung San Suu Kyi, under house arrest and charged her with inciting unrest. At the same time, the country's population including students and academics have taken to the streets to demonstrate. On Sunday, the media reported that at least 18 people had been killed in clashes between police and protesters. In addition to Bjertness, Norwegian Foreign Minister Ine Eriksen Søreide is among those who condemn the violence against the protesters.

It cannot be the case that we support the military regime through the work. They have seized power illegally and deprived the population of democracy. I condemn the coup, says Bjertness.

Bjertness continues to explain that he has good contact with several of his partners in the country, some of them every day. Many academics in the country demonstrate during the day and work voluntarily as doctors at night. They have also organized mobile clinics in ambulances and private hospitals are accepting patients now that health professionals refuse to go to work. It is a civil disobedience movement (CDM) that has broad support in the country, he explains.

Bjertness explains that the new project is a collaboration between UiO, the National Institute of Public Health (NIPH), universities in Thailand along with several universities in Myanmar, and will strengthen the country's health systems.

"It includes building the health economics profession to help meet the sustainability goal of universal health coverage, building hospital ethics, providing research-based knowledge about the health of populations in troubled areas of Myanmar, and preventing non-communicable diseases," he said.

Among the work they have contributed to in the past is a project to establish a national digital health information system in the country. The Ministry of Health in the country decided to use DHIS2, which was developed by Professor Jørn Braa and his group at the Department of Informatics in the 1990s. The fact that the health register has become digital makes it easier to get an overview of the population's health status. In Myanmar, it has until recently been paper-based.

Used to be a role model

Knut Staring is a senior engineer at the Department of Informatics and has also worked extensively with this project. The coup has also given rise to the subsequent strike and the boycott CDM, which many with key roles in society support. It can also have consequences for public health in the country, he says. Attempts have also been made to use this system in the roll-out of COVID-19 vaccines before the coup came. The situation now is that many doctors and other government employees have not shown up for work. It was not the intention that the system should stop being used after the pilot period, he says.

Staring says that the country previously had an excellent education system, but this suffered a setback after the previous military coup.

In the 50's, wealthy people from neighboring countries sent their children to Yangon to get an education. At that time, the military managed to destroy one of the best education systems in Asia. One of the first things they did was blow up the student community, he says.

The plan is to strengthen the focus on cooperation through the new funding from Norad with activities that will improve Myanmar's health system and contribute to a fairer health service. Among other things, between ethnic groups and urban and rural areas, says Bjertness. It is important not to give up now that there is unrest and disorder, but we must support our colleagues in Myanmar, he says.

Hannah Cooper is the SAIH (Student and Academic International Aid Fund) program advisor for Myanmar. The organization collaborates with four partner organizations spread across the country. Three of them are non-governmental higher education institutions in ethnic states, while one is an interest group. She says that people they have been in contact with have been optimistic about the future and felt that the country has moved in the right direction going forward - until now.

Cooper says that those in the country she has spoken to feel that they are now "back to the old days," before the country began its democratic development process. Myanmar was previously ruled by a military regime for half a century, from 1962 until the beginning of the reform process in 2011.

The interest group SAIH collaborates with Colors Rainbow, an LGBT group that works to improve the attitudes and living conditions of the country's queer population. Myanmar still has conservative legislation in this area, but things were changing, Cooper believes. Colors Rainbow, among other things, engages in attitude work in the higher education sector. Sex between same sex people is criminalized by law, but attitudes are changing. A survey conducted in 2020 showed that the attitudes of the population were changing, she says to Uniforum.

This is a direct translation of the UniForum article, Usikker framtid for UiOs prosjekter i Myanmar.