Per Ole Iversen in Tanzania

New Global Health Traveller blogpost from Per Ole Iversen, professor at Division of Clinical Nutrion at Institute for Basic Medicine at UiO and a board member of the Centre for Global Health Steering Committee. 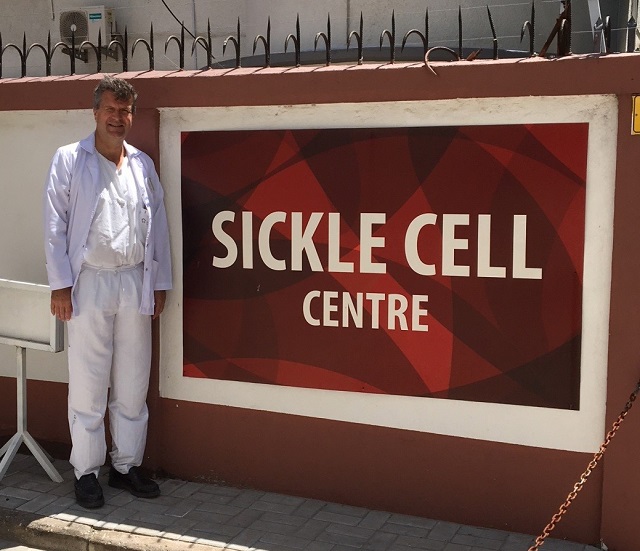 (Per Ole Oversen outside entrance to the Sickle Cell Centre at MUHAS. Photo: Marianne Iversen)

«This way, Sir!»  The gentle immigration officer took me by the hand and led my wife and I past the ever-increasing queue at the airport in “The House of Peace” (Dar es Salaam).  Despite submission of work permits and visas half a year ago we still had not gotten the approvals. But, during our flight something came from cyberspace and when my mobile was turned on at the airport I had got an official letter accepting temporary visa. Nice start of our one-year stay in Tanzania where I will partly be working as a doctor under the auspices of  Health Volunteers Overseas (HVO) and partly as a Guest Professor at the Muhimbili University of Health and Allied Sciences-MUHAS. HVO is a US-based NGO established in the 1980s.  Its main aim is to establish long-term, sustainable collaborations with selected institutions in developing countries to improve health care. MUHAS is a major university hospital in Tanzania with a strong focus on inter alia sickle cell disease, an inherited disease of the hemoglobin molecule, not seen among native Norwegians, but quite frequent in sub-Saharan countries, partly due to its resistance to malaria – and that happens to be a major area of work for me as a hematologist at the National Hospital in Oslo.

At my first day I saw a young cachectic man. No diagnosis was made, but clearly he had a long-standing condition, probably cancer. He just got a sip of morphine, then he passed away before my very eyes.  The next one had paralysis of his legs for 2 months due to untreated multiple myeloma, so the prognosis was dismal. I could go on, but it suffices to say that the hospital, which is a major referral center in Tanzania, is under-resourced, under-staffed and many patients unfortunately come too late for proper treatment. I had some experience with working in low-resource setting hospitals before, so it wasn’t that unexpected, but I still battle with frustrations.

Not one boring day at work

The workday offers multiple challenges. I spend much time on teaching interns (“turnuskandidater”) and registrars/residents (“assistentleger”). This is a pleasure as they are very eager to learn. Time and time again I am baffled by their courtesy - a characteristic that is applicable to almost all Tanzanians I have met so far.

All in all, my experiences so far have definitely matched my expectations. Maybe it should be on everybody’s “bucket-list” to sometime tread a little bit out of the comfort zone.

I wish you all a merry Christmas and a prosperous 2019!

By Per Ole Iversen
E-mail this page