Research of migration health needs to expand its reach and start looking into the health determinants, or the “causes of the causes” behind migrant health issues. We must also combine experience and knowledge outside of specific in-country settings to achieve universal health coverage and the right to health for all. 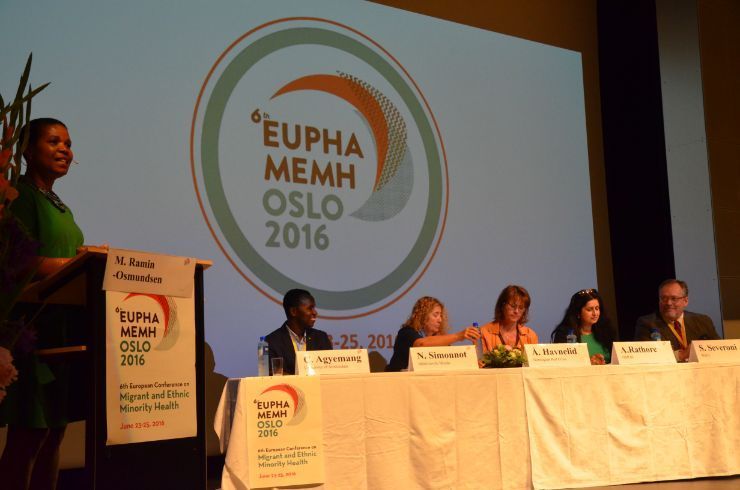 Ramin-Osmundsen speaking at the 2016 EUPHA conference in Oslo.

"Once I thought my innocence was gone. Now I know that happiness goes on..."

- Billy Joel (For the longest time)

On that hopeful note performed by humouristic and charming boy choir VoiceOver began the 6th EUPHA Conference on Migrant and Ethnic Minority Health (MEMH) held in Oslo and hosted by NAKMI (Norwegian Centre of Minority Health Research). Researchers, doctors and policy makers from over 30 different countries around the world, as well as representatives from WHO, UNICEF, Red Cross, Medecins Sans Frontieres, Medecins du Monde and others, gathered together to discuss the evidence and future direction of migrant and minority health research.

Dispel the fear, fantasies and myths of migration

Media, politics and popular opinion will not let you escape the hot topic of migration in Europe and one will find as many opinions about it as there are people. The purpose of research is to dispel the fear, fantasies and myths surrounding the changing dynamics of migration around Europe. Therefore, it was not surprising to hear a re-framing of migration that would challenge most of the popular fears one might hear in the media - migration, it was said, might be a crisis, but for the migrant, not for Europe. For Europe it is a manageable change of demographics and diversity.

Maintaining the theme of expelling the myths surrounding migrant health and propelling research forward some key themes were highlighted during EUPHA-MEMH conference.

One interesting fact that was demonstrated and discussed was the "Healthy Migrant Effect" (HME). HME was first described in the United States and suggested that first-generation Latino immigrants to the US are healthier than both Latino and non-Latino-whites that were born in the country. The explanation for this could be that people who are healthy are generally in a better position to migrate in the first place and, in comparison to the broader health status of the local population, one would expect to observe a higher average health status in these migrant populations.

Indeed, a lot of research findings presented at EUPHA-MEMH proposed that HME could explain some of the health status differences between migrant and local populations in many countries in Europe. However, when diving deeper into the healthy migrant paradox, one begins to notice the complexity of this issue, for example, results of several studies showed that although overall morbidity and the use of health services in many migrant populations are lower than in the local population (corrected for several factors including socioeconomic status), certain health issues are still dominant in migrant populations. Examples being obesity and type II diabetes rates in Somali migrants in Oslo and mental illness in refugee and asylum seeker children.

Other challenges still facing many migrants include mental health (in both children and adults), gender-based violence, infectious diseases and developing chronic diseases associated with longer periods of stay in host countries. There are also structural issues that were discussed, including health service delivery for undocumented migrants, multicultural awareness in health systems, battling discrimination and designing effective evidence-based policy and technical assistance.

In conclusion, as with a broader and more ambitious focus entering the era of the SDGs, so research of migration health needs to expand its reach and start looking into the health determinants, or the “causes of the causes” behind migrant health issues. Additionally, considering migration and migrant health in isolation is not enough. Europe and the world are faced with a permanent population flow and a global demographic change. We must be prepared to address and consider the needs of the entire population and combine our experience and knowledge outside of specific in-country settings to achieve universal health coverage and the right to health for all.

By Ekaterina Bogatyreva
E-mail this page