Shrunk the professor and sent him into patient's colon

Professor Michael Bretthauer was the first gastroenterologist to be teleported into a patient's colon in a shrunked version of himself, only to get a better view of the colonic polyps. The sensational event took place during the Felix Burda Award in Berlin this weekend. 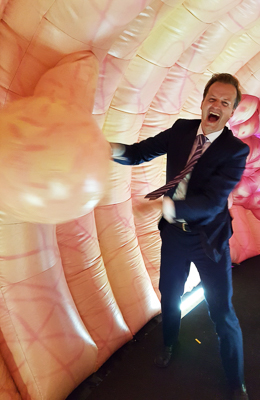 Prof. Michael Bretthauer is now 20 mm tall and he lives in one of his patient's colon. Photo: Michal F. Kaminski using a colonoscope.

Professor Michael Bretthauer at Clinical Effectiveness Research Group at the Universe of Oslo/Norway, was this weekend sent into a totally new universe, a new dimension, being the first modern scientist to really go all in to treat the patient. Using top modern quantum physics and cooperating with The Faculty of Maniacs and Unnatural Sciences, the innovative professor shrunk himself and was later teleported into the patient's colon. Hence, Bretthauer avoided using the main entrance, which he is very happy for today. The sensational experiment took place during the Felix Burda Award i Berlin, and was a result of the second place Bretthauer was given in this important competition. In order to make a scientific impact, he wanted to try this experimental approach to endoscopy and patient care. The professor has managed to get a couple of messages through to the external world after the teleportation:

This is fantastic, it's the future! I can see the colon and polyps much better from here, shouts Bretthauer.

Bretthauer sees this experiment as a break through in endoscopic procedures, and is rather optimistic about the chances of winning the Felix Burda Award next year.  There is only one minor drawback with this new method, says Bretthauer:

We can't all do this immediately and at the same time. Then there won't be any doctors left outside, shouts Bretthauer.

The reason is that as of today, nobody knows how to reverse the shrinking and the teleporting. That's why we probably won't see prof. Bretthauer again any time soon.

The patient has agreed to the article and the photo.