M.Sc. Alka Rani Goyal at Institute of Health and Society will be defending the thesis “Anxiety in people with dementia: A common, but unidentified and underestimated, condition” for the degree of PhD (Philosophiae Doctor). 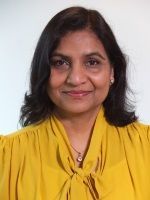 In her thesis, Alka Rani Goyal and collaborators translated the Rating Anxiety in Dementia scale (RAID) into Norwegian (RAID-N), and investigated the validity of the RAID-N scale. Further, anxiety and anxiety symptoms were assessed with the RAID-N scores among people with dementia living in Norwegian nursing homes to describe the prevalence and the course of anxiety in dementia.

About one of three nursing home residents with dementia had clinically significant anxiety (RAID-N sum score 12 and above) and anxiety symptoms both at baseline and at 12 months follow-up. Motor tension, frightened and anxiousness, irritability, and restlessness were the most prevalent symptoms of anxiety, and should encourage further assessments in people with dementia.