MD Soheir Hassan Ahmed at Institute of Health and Society will be defending the thesis “Prevalence of cardiovascular risk factors among Somalis living in Norway and Somaliland” for the degree of PhD (Philosophiae Doctor). 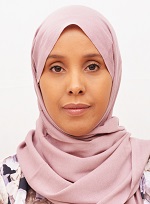 Cardiovascular disease (CVD) is the leading cause of death worldwide. CVD can to a large extent be prevented through healthy lifestyles. Generally, information about CVD risk factors in the Somali population both at home and in the diaspora is very limited.

Thus, the overall aim of the thesis was to assess and compare the prevalence of CVD risk factors among Somalis in Norway and Somaliland. The thesis composes of two cross-sectional studies conducted in Hargeisa and Oslo among women and men aged 20-69-years carried-out between 2015 and 2016.

In conclusion, in spite of higher overweigh and obesity among Somalis in Oslo, blood lipids tend to be more favourable in Oslo compared to Hargeisa. There were no significant differences in the predicted 10-year CVD risk based on Framingham models in both locations, however, men tended to have a higher predicted 10-year CVD risk score than women. The findings provide information to help in planning and addressing prevention methods towards cardiovascular diseases and their risk factors among Somalis living in Oslo, Norway and Hargeisa, Somaliland.