MD, Mphil Carolina Rau Borges Steuernagel at Institute of Health and Society will be defending the thesis “Evidence in Practice: The case of lesbian health invisibilities in Brazil” for the degree of PhD (Philosophiae Doctor). 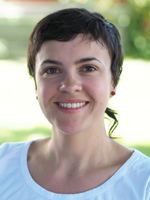 The idea that evidence is a combination of facts that provides the best estimate of reality is a key notion in health research and care. This thesis stands at odds with this conception. Tracing the phenomenon of lesbian health in Brazil, this work examines evidence as practice: as a series of events that produce realities. Ethnographic material (interviews with women, participant observation in an organization, and text analysis of articles and policies) is analyzed to demonstrate the many different ways in which lesbian health may come into being as an effect of doing evidence. The research methods that produce and validate evidence, the statistical logic of evidence-based medical decisions and the political dimensions of fact-making are critically discussed as actors that could take part in enacting lesbian health as invisible. The analysis of women’s narratives demonstrates how the logic of evidence making, which achieves objectivity by excluding events deemed unnecessary, may be translated into ways of practicing care: female same-sex practices could disappear under high HIV infection rates among men who have sex with men, and bodily features could be made invisible by the risk of developing cervical cancer triggered by a virus associated with heterosexual sex.

In this work, women are analyzed alongside texts, which allowed for the observation of how texts participated in transforming lesbian invisibilities into a health issue. Drawing on anthropology, philosophy and science and technology studies, the thesis argues that texts not only describe facts but re-signify them by juxtaposing events that otherwise would remain separated. Acknowledging texts as co-producers in research reframes evidence as practices that are continually being enacted. Published facts are not a final product. Evidence depends on how pieces of texts are used, read, quoted, republished, applied, and interpreted, and new realities come to exist by the enacting capacity of textual material.