Is your health ruled by wind, bile or phlegm? Immersive work of Theresia Hofer explores Tibetan medicine in a new and exciting way. 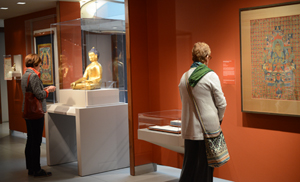 38,000 visitors have bought tickets to  the exhibition curated by Theresia Hofer at the Rubin Museum of Art in New York. Photo: © T. Hofer

Medical anthropology is a niche subject, if you add to that the field of Tibetan studies, one may imagine that we are entering the realm of dusty academia seldom visited by young researchers today. This is far from the truth in the life of Theresia Hofer who's immersive exhibit Bodies in Balance: The Art of Tibetan Medicines has been exhibited by the Rubin Museum of Art in New York.

This show brings the medical anthropology of Tibet out of the academic journals and into the minds of a wider population by the use of objects, video and visitor experience to give participants an accessible insight into the ideas and the work of those practising this ancient form of medicine. 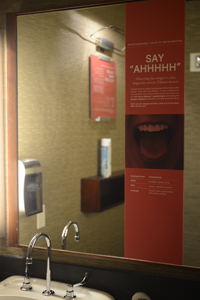 Self-diagnosis instructions regarding the main indications of wind, bile and phlegm in the lavatories of the Rubin Museum of Art. Photo: © T. Hofer

The aim of the exhibition is to engage participants with the subject matter, rather than simply presenting it to them in display cases alone. The show hence includes attractive jars filled with differently textured and coloured raw ingredients that are used in Tibetan medicines, some of which can also be used as spices. It even includes instructions on urine and tongue diagnosis in the toilets so that visitors could attempt to examine themselves after they have learnt what Tibetan doctors look for.

The website for the exhibit invites people to take part in a questionnaire to determine the prevalence of the three forces of wind, bile or phlegm in their constitutions from birth. Take the Quiz.

Evolution of an idea

Theresia began her studies in social anthropology at the University of Vienna and then moved to the UK to study for her MSc and subsequently PhD in medical anthropology and medical history.

During a year spent in Tibet doing fieldwork on how Communist reforms had affected the practice of Tibetan medicine she managed to see a number of paintings from the original 79 plates of the seven-teenth century paintings that depict many of the core Tibetan medical ideas, originally written down in the 12th century Four Tantras medical work. While some of the visual illustrations depict the so-called medical trees and large anatomical drawings others depict in an almost comic strip type fashion the manifold encounters of doctors and patients, Tibetan food items and the many day-to-day activities that we all engage in.

Theresia hit upon the idea that as so much academic output comes in the form of text, that it would be an exciting challenge to try and do something which was much more visual than text based and would thus have the potential to attract the attention of a much wider audience.

A few years later, Theresia returned in earnest to these ideas that had been ripening throughout her PhD. By 2009 she managed to get the agreement from the Rubin Museum board and began to work on the project while largely based in London and Oslo, but with regular trips to New York.

Theresia explains, "I was excited by the idea to engage a wider audience in the fascinating work that we academics actually do, but that most people rarely ever get a glimpse of. I got involved in medical anthropology generally because I had a desire to investigate something which would also be of real-world benefit to people and that was also very much alive. Despite its ancient roots Tibetan medicine remains a dynamic system of knowledge and practice that even without the Tibet-specific pharmacopeia has a whole lot to offer to people’s endeavours in the domain of health and well-being."

Metamorphosis into a curator 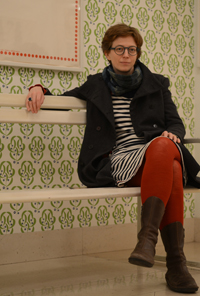 What makes Theresia's achievement all the more remarkable is that she has no formal training as a curator - instead she has learnt along the way.

"As a passionate museum goer from childhood and having done a few smaller photographic exhibits before, I felt very much at home in this world. I somehow knew that I could pick up the necessary skills and that through conversations with colleagues and an active engagement with the subject matter I would be able to curate an attractive exhibition."

Although she is modest, Theresia's achievement is no small one. Curation of the exhibition involved 32 lenders from seventeen different countries on three continents, including items lent from The British Museum, amongst others.

The changing role of women in healthcare

Theresia's current project at the University of Oslo has grown out of ideas sown during her extensive visits to Tibet during her MA and PhD work. 'Women doctors in Tibetan medicine and the modernisation of healthcare' aims to look at the hidden role of women in healthcare modernisation in Tibet.

Until the 1980s there were very few female doctors and those that did practise were not represented in the literature.

Theresia says, “I was curious to examine the claim of some earlier communist reformers that there had been no female doctors prior to Maoist reforms and more broadly what has led in recent years to the increasing numbers of women entering professional Tibetan medicine.”

Although gynaecology and paediatrics are two of the eight branches of Tibetan medicine and as such studied and applied by all Tibetan medical doctors, Theresia was interested to see whether these two fields are now developing in the presence of more women practitioners.

“In the past a lot of the knowledge in this area had been written about by men, but they had rarely attended labour or childbirth, and there had been (and still are) a whole host of obstacles to getting women the health care they need and deserve.” says Theresia says.

“I wanted to investigate how knowledge and skills in the fields of childbirth and gynaecology were now applied by both women and men and how their methods and skills differed and/or were changing, given new diseases, the engagement with biomedical ideas and practices, and also given the changing role of women in Tibetan society more broadly."

The importance of balance

It is easy to see how Tibetan medicine, which places a great deal of emphasis on balance and a great deal of empirical understanding, can be captivating to someone studying medical anthropology. Although Tibetan medicine has not received the widespread coverage and acceptance that Chinese medicine or Ayurveda has done, there are still analogies, which can be drawn on in relation to how we understand many medical issues in the West.

Original drawings in the exhibition include diagrams of foetal development and even medicines which have been investigated through double-blind clinical control trials as potential treatments for complications following childbirth, such as post-partum haemorrhage which remains one of the most common causes for maternal deaths in low-income countries and regions of the world.

Touch plays an important role in Tibetan medical practice, with doctors frequently placing their fingertips on their patients’ wrists in order to read their pulse to diagnose diseases. As Theresia explains, "typically an experienced doctor may consult a patient for perhaps just a few minutes, which is shorter than a doctor in the NHS would, for example, however, they may touch the patient for half that time. This contact itself plays an important part in building mutual trust and it offers crucial information on what medicine or treatments should be prescribed." 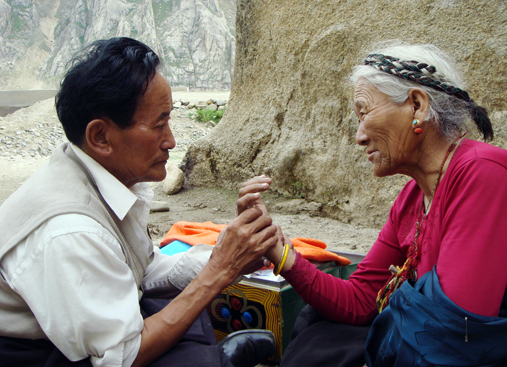 A senior Tibetan doctor reading the pulse of a female patient by the roadside, Central Tibet, 2007. Photo: © M. Hofer

Dedication to the cause

Theresia has witnessed first-hand the lengths that doctors go to reach their patients, often in rural or difficult to access locations. "I worked with a doctor who used to purchase medicines himself, out of his own money. He would spend a week or two travelling to remote villages to ensure they received the medical attention they needed. I found the fact that he did this of his own volition, and through his own dedication very inspiring. I was captivated by the ethical basis that underpins a lot of this practice."

This reflection on the responsibility and role that practitioners play has led Theresia to deeper reflections on the practice of medicine and its impact in the West.

Cultures of medicine and the importance of communication

"It is important for doctors to recognise that they are part of a culture of medicine into which they are immersed through their training. Although a doctor in England would have a different cultural experience of that of a doctor in France, or indeed Tibet, it is important for these medical practitioners to recognise that the patient they are treating does not have that same experience; they are not immersed in that culture. Doctors need to remember the importance of good communication across even the professional and lay domains when dealing with those who seek their help."

In Tibet, the closest word to 'health' is 'troten' which literally translates as 'to rely on what suits you '. Wind, bile and phlegm all stand for certain qualities as found in food, behaviours, the seasons and the environment which need to be engaged with in such a way that it would suit the innate characteristics of each human being. This balancing act can be achieved with medicine, or by eating certain foods, or adopting particular behaviours.

It is this emphasis on achieving a subtle balance of lifestyle, diet and well-being, according to 'what suits you best' that will resonate with human beings the world over. It empowers, but also places responsibility, not only on the physician, but also the patient. 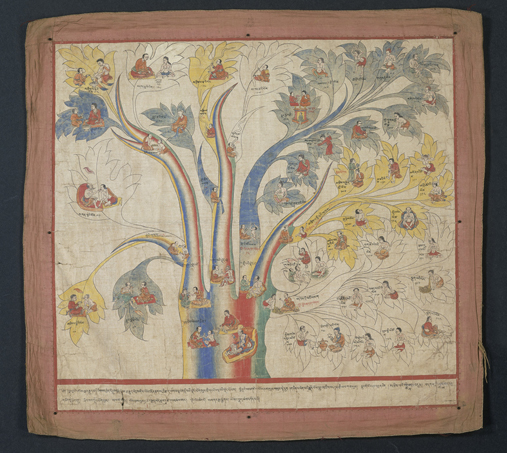 A Tibetan diagnosis tree depicts the three ways of conducting the visual obersvation of the tongue and urine, the reading of the pulse and the taking of a detailed medical history. Photo: Courtesy of the Pritzker Collection, Chicago

Theresia intends to continue her studies into the intricacies of the Tibetan culture when she moves on from the University of Oslo next year. The idea that these highly academic subjects should be brought out for popular consumption is definitely something she intends to take with her in her future endeavours.

"Many researchers would be surprised at how interesting and exciting it is to engage with the general public. It's surprising how many opportunities open up when you reach beyond the traditional academic channels. Reaching beyond these boundaries has been a very positive experience for me.”

“In order to communicate your ideas effectively, you have to be clear in what you are trying to say, you have to distil things down. Not only that, but outreach is incredibly rewarding.”

Juggling the demands of academic endeavours with the desire to reach out is a feat which Theresia is now adept at. Applying theoretical knowledge in practice is something she has both studied and enacted in her projects. It's all a balancing act underpinned by an interest in philosophies and teachings which are about thousand years old, and if we can learn anything from Theresia's work it's that human history can teach us much going forward, even if our perspectives appear to differ, sometimes they're closer than we might imagine.

by Nicola Thomis, Communications Coordinator at the University of York (on Erasmus Staff Mobility Exchange)