Functional anatomy of the small pelvic and hip muscles (completed)

The deep gluteal muscles or external hip rotators are known contributors to low back, pelvic and hip pain, but our knowledge about their function and accessibility for exercise is insufficient. 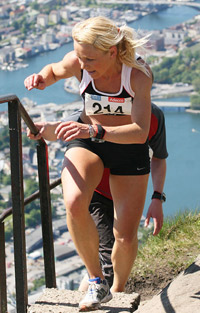 To establish an empiric foundation for specific physical actions, we will map the movement range of the deep gluteal muscles in donated human bodies.

To develop an evidence based understanding of the function of the small and deep pelvic muscles, we will measure changes in muscle length by different rotations of the hip joint. Knowledge on the muscles’ movement range is needed for defining effective physical tests and exercises.

In addition, this knowledge can increase diagnostic understanding of activities that may evoke pain from these muscles, for the benefit for patients groups with low back, pelvic and hip pain.

Our objective is to develop knowledge about optimal positions for stretching and developing strength from the muscles piriformis, obturator internus and gemellii, quadratus femoris, and obturator externus. 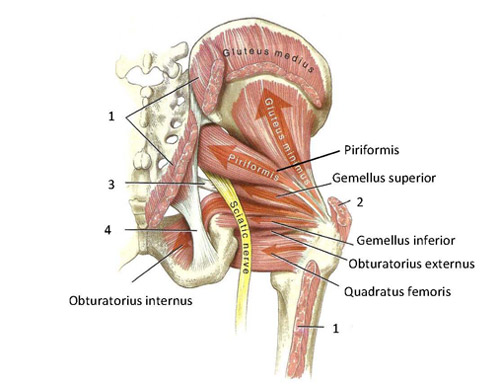 Figure: The deep gluteal (external rotator) muscles on posterior and lateral side of the pelvic and hip area. The superficial muscles gluteus maximus (1) and gluteus medius (2) are excised, to uncover the deep sacrospinosus (3) and sacrotuberalis (4) ligaments and the deep gluteal muscles. (Reproduced from with A. Neumann, Kinesiology of the Musculoskeletal System – Foundations for Rehabilitation, 2nd edition, Chapter 12 Hip, p. 496, Elsevier (2010), with permission).

Pain and disability related to the low back, pelvis, and hip is common. A known alternative diagnosis for joint pain is the piriformis syndrome. Piriformis is a deep gluteal muscle which spans the pelvic and hip joint, and which clinically is associated with several diagnoses and symptoms. Lately another deep pelvic and hip muscle, obturator internus, is proposed as the main obstructer of the sciatic nerve.

However, exercises for stretching and strengthening of the deep gluteal muscles are still performed with straight hips and with main focus on the external rotator function.

We therefore aim to map out the movement range of the deep pelvic and hip muscles, for establishing an empiric foundation for improved physical actions for patients with low back, pelvic, and hip pain.