Professor Einar Røshol Heiervang thinks it has been rewarding to do health services research in the CARE project. The collaboration between the researchers and the authorities has contributed to proposals for amendments to the Norwegian Child Welfare Act. 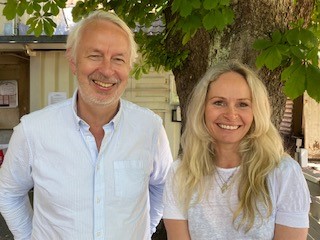 Professor Einar Røshol Heiervang and PhD student Monica Christine Haune are the researchers from UiO who have evaluated the CARE model in collaboration with colleagues from OsloMet and Norce. Image: Anne Åbyholm-Brodal, UiO.

The CARE model is a model on how to map the health and care needs of children who are moved out of the home by the Norwegian Child Welfare Services. Research through several decades has shown that these children are an extreme high-risk group for both mental and physical illnesses.

– We follow up a number of national and international recommendations from various professional bodies that recommend routine and broad mapping of these children's needs, says Heiervang, who has led the project.

The evaluation shows that the CARE-model works well and the model has received great support.

Minister for Children and Families, Kjell Ingolf Ropstad, Minister of Health and Care Services, Bent Høie, and the Ombudsperson for Children in Norway, Inga Bejer Engh, have taken interest in the project. On 18 June this year, public broadcaster NRK interviewed all three along with Heiervang for the news radio programme ‘Nyhetsmorgen’.

– It has been rewarding to see that the authorities have noticed these research results. They have referred to this study on several occasions, Heiervang says.

Proposal for an amendment to the Norwegian Child Welfare Act

The government has now proposed an amendment to the Norwegian Child Welfare Act, which is a step towards securing the right to an interdisciplinary assessment of health and care needs of this vulnerable group. However, Heiervang believes that the proposed bill is not sufficient.

– According to the new bill, an assessment of the need to map the child’s health and care needs will be made for each individual child. Both the Ombudsman for Children and we have expressed concern about this.

They are concerned that not all children and young people who might need help from different services will be identified.

– Those who work in the Child Welfare Services are not experts in children’s health. Specialists in mental and physical health can see things that others can overlook, the researcher elaborates, and adds:

– But it is a step in the right direction and an important breakthrough.

Heiervang believes that all children and young people who are moved out of the home due to neglect, abuse or maltreatment should have the right to a thorough assessment of their health and care needs.

Good collaboration between the researchers and the authorities

The CARE model has been developed in collaboration with the Child and adolescent psychiatric outpatient clinic - BUP, and the Child Welfare Services. The authorities have monitored the project closely. Both the Norwegian Directorate for Children, Youth and Family Affairs and the Norwegian Directorate of Health were included in the reference group.

In 2015, the Ombudsman for Children already published a report stating that one should have a more thorough assessment of the needs of these very vulnerable children.

– Putting this on the agenda in the bureaucracy and in politics has been a process over several years, Heiervang says.

He thinks that it has been very interesting to follow the political process, and believes that the collaboration between the researchers and the authorities has been good.

– The research project and the results have been very important in gaining support for the implementation of a health and care needs assessment. Directorates and ministries have appreciated that we have evaluated a model systematically, the researcher points out.

Heiervang emphasizes that they have been free to carry out the project as they wished and that the authorities have not tried to influence this.

Wants to inspire other researchers

– The project shows how we can organize ourselves to reach those who need it most, in the best possible way. It says something about how we can use the resources we have and improve the way we do things, Heiervang says, and adds:

– Health care services research and research on children have not had the highest status. Nevertheless, it really is possible to change the systems and practices if you work systematically.

He hopes that the success of the CARE project can inspire other researchers.

Has applied for funding to investigate how the children are doing

In collaboration with Save the Children, Heiervang has applied for research funding to investigate whether the help the children have received after the assessment has yielded results. Together with a new doctoral researcher, he wants to follow these children for the next five years.

– It has been the plan from the very beginning of the study to follow these children over time. It will be a huge step forward if we can show that this leads to a better future for these vulnerable children, he says and continues:

– One would like the authorities to routinely evaluate the effect of the measures and services they initiate. I hope the government gets there someday.

In addition to Heiervang, the evaluation of the CARE model was carried out by PhD student Monica Christine Haune, researcher Trine Myrvold from OsloMet and researcher Øivin Christiansen from Norce. The project is coordinated by Anne Åbyholm-Brodal.