Raquel Bartolomé Casado is awarded the medal for her contribution to new knowledge about immunological memory in the gut. The findings from the doctoral dissertation may be important for the development of oral vaccines and treatment of intestinal diseases in the future. 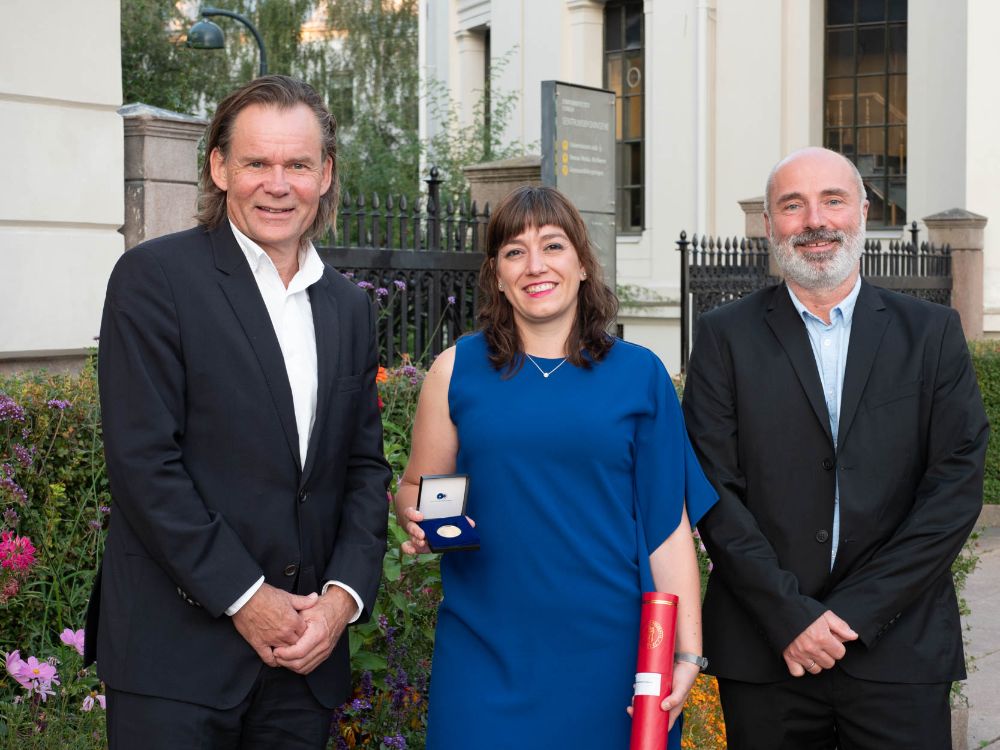 The H. M. King's Gold medal is awarded to an outstanding, younger researcher for a scientific work judged at UiO. The work must be recognized as an effective contribution to the field's research literature. The medals are handed over at the university's annual festivities.

– I am extremely pleased and honoured to be receiving the prestigious H. M. the King’s Gold medal. I am very grateful that my PhD work is appreciated and recognized in this way, says Casado.

– It is incredibly nice and well deserved that Raquel receives this award, and a feather in the cap for the others in the lab who have contributed. This is outstanding work, comments Professor Jahnsen, who is section leader at the Department of Pathology at the Institute of Clinical Medicine.

Casado points out that research is a team effort, and that her PhD work is the result of the joint efforts of many colleagues and members of Jahnsen’s research group.

– It has been a great place to grow as a scientist, she says.

She wishes to thank her supervisors and co-authors for a constructive collaboration over many years.

– The administrative support and the collaborative network of researchers at the Institute of Clinical Medicine has been fundamental, says Casado.

Examined how long immune cells live in the gut

Casado investigated the longevity of the cells responsible for immunological memory, so-called T cells and plasma cells, in the human intestine. The gut is continuously exposed to various substances, bacteria and viruses. This leads to continuous changes in the microenvironment of the gut.

– Until very recently, researchers have believed that intestinal plasma cells and T cells were replaced very quickly to respond to the changing microenvironment of the gut. Against this dogma, my PhD work revealed that this belief is not correct, she says.

– This finding constitutes a paradigm shift in mucosal immunology, Professor Jahnsen points out.

Implications for future prevention and treatment of intestinal diseases

Casado’s doctoral work can have important implications for the design of oral vaccines as a preventive treatment against diseases of the intestine.

– Despite large efforts over many years, there is only a handful of commercially available mucosal vaccines. Our findings lead us to expect that it is possible to achieve long-term immunity against pathogens that cause disease in the gut through mucosal vaccination, such as oral tablet vaccines, explains Casado.

On the other hand, T cells and plasma cells play an active role in pathological processes in intestinal disorders, such as coeliac disease and Crohn’s disease. The knowledge that the adaptive immune system in the human gut is very stable over time has therefore important consequences for the treatment of intestinal inflammatory disorders.

– The goal of treating these diseases is therefore to inhibit the activity of T cells and plasma cells. Our research, which shows that immune cells live very long in the gut, will be important for the treatment of these diseases, says the young researcher.

Raquel Bartolomé Casado's doctoral thesis was entitled Longevity of the adaptive immune cell compartment in the human small intestine and consisted of four peer-reviewed articles. The quality of Casado's work has already been recognized in various forums nationally and internationally. One of the articles was awarded best article at Oslo University Hospital in 2017 and one of the other articles reached the final heat in 2019.

– Professor Laura Mackay from Melbourne and Professor Tom MacDonald from London were the first and second opponents. Both are internationally leading researchers in the field of immunology. Their conclusion on the work was the following: "This is an outstanding thesis which overturns many of the pre-conceptions relating to the lifespan of mucosal T and B cell populations".

Will continue research on the immune cells in the gut

As a postdoc, Casado has chosen to study the mechanisms and anatomical niches that promote the development and maintenance of resident memory T cells in the human gut.

– I recently received a three-year mobility grant from the Research Council of Norway and I will spend two years at the group led by Professor Sarah Teichmann, who is a co-founder of the Human Cell Atlas Consortium, at the Wellcome Sanger Institute in Cambridge, UK, she says.

Her plan is to return to Oslo in 2023 and continue her research career here.

8.9. The description of the medal, as well as the link to the UiO information page about the medal, were added.