The response of tissue-resident cells to infection or trauma incites an inflammatory response that leads to activation of vascular endothelial cells. Once activated, they are key players in the initiation and amplification of inflammatory responses, and their role in recruiting leukocytes to inflammatory lesions by expressing adhesion molecules and chemokines is now well characterized. On the other hand, we are only beginning to understand the mechanisms that control their level of quiescence and how proinflammatory responsiveness can be modulated. 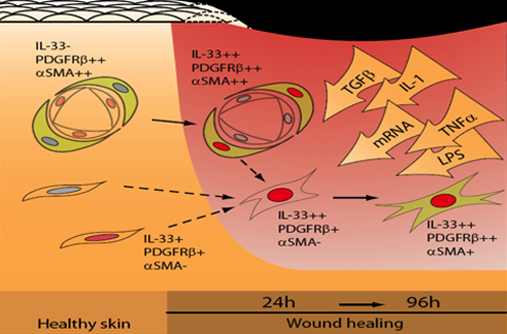 Schematic representation of IL-33 induction in fibroblasts, pericytes, and myofibroblasts during wound healing. Stromal, tissue-resident, fibroblasts (IL-33 positive or negative) are activated by mRNA/TGF/lipopolysaccharide to express nuclear IL-33 (red nuclei) and may contribute to the pool of myofibroblasts invading the wound area. Likewise, pericytes become activated and may contribute to this pool. By contrast, vascular endothelial cells, which are strongly positive in healthy tissue, down-regulate IL-33 in the course of activation.

Mechanisms that regulate endothelial cell differentiation/activation are potential drug targets that may enable enhance the healing of ischemic lesions, modulate the leukocyte migration of inflammatory disorders including transplant rejection, and control of cancer growth and metastasis. Morover, other stromal cell types are also strongly involved in the development of the inflammatory response. Persistent inflammatory activation leads to tissue damage and development of fibrosis and subsequent fibrosis with loss of organ function.

Studies from our group have added to this picture: