Centre for Molecular Medicine Norway (NCMM) was formally inaugurated as a joint venture between the University of Oslo (UiO), as host, the Research Council of Norway (RCN) and Health Region South East (HSE) at the end of 2008. 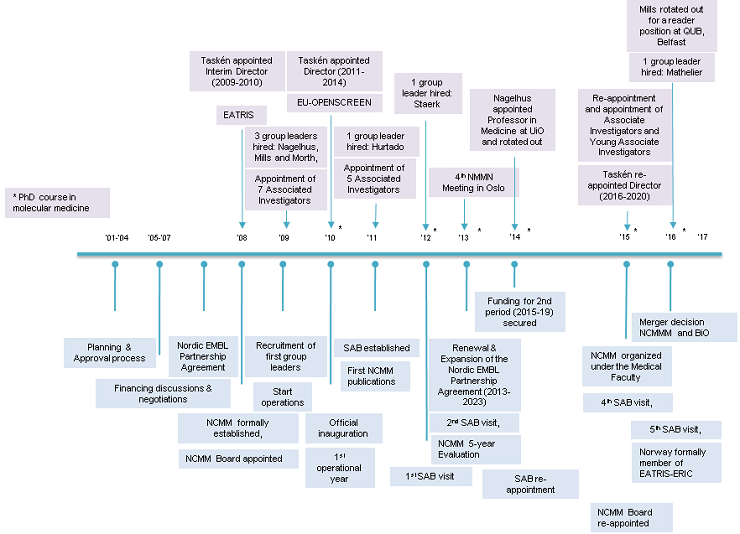 The overall objective of NCMM is to conduct cutting edge research in molecular medicine and facilitate translation of discoveries in basic medical research into clinical practice. NCMM focusses particularly on disease mechanisms where Norway has clear strengths and investigates mechanisms of non-communicable diseases such as cancer, cardiovascular and CNS-related disease and immune disorders. NCMM develops and adapts technologies for personalized medical applications and has unravelled new diagnostic methods and drug targets.

NCMM is part of the Nordic EMBL Partnership for Molecular Medicine which was established in 2007 as a joint venture (2008-2012) between the European Molecular Biology Laboratory (EMBL) and the Universities of Helsinki, Oslo and Umeå. A Danish node (Dandrite) joined the Partnership in 2013.

The Partnership is dedicated to the growing field of Life Sciences that investigates the molecular basis of disease and explores molecular and genetically based treatments. It capitalizes on regional, complementary strengths in the Nordic countries and each of the four partner nodes brings in a unique set of expertise, skills and facilities encompassing EMBL’s recognized research strengths in the areas of molecular, cellular and developmental biology, bioinformatics and structural biology.

Altogether, the Nordic EMBL Partnership constitutes a coordinated Nordic infrastructure for enhancing molecular medicine scientific findings through a translational research pipeline, putting scientific discoveries into clinical use in an efficient way and equipping the partners to tackle some of the most challenging problems of biomedicine.