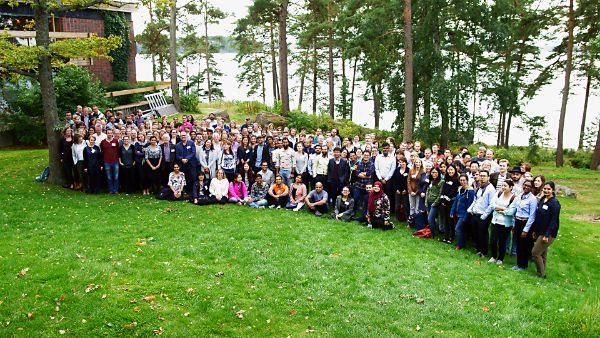 The meeting was the biggest yet with over 200 attendees from across the four Nordic nodes. Aside from FIMM, visitors came from DANDRITE (Danish Institute for Translational Neuroscience, the Laboratory for Molecular Infection Medicine Sweden (MIMS), the Centre for Molecular Medicine Norway (NCMM) and the EMBL in Heidelberg.  This year’s meeting took place at the Conference Hotel Rantapuisto just outside Helsinki, and its coastal forest location made for a great conference setting.

These annual partnership meetings encourage researchers of all levels from all nodes to challenge their science knowledge base, find their next collaborator, spark their career, and widen their network. There is particular emphasis on encouraging the Partnership’s Young Investigators (PhD students and Postdocs) to engage with each other, through a specially designed programme.

The 2017 programme differed from previous years, with a real focus on encouraging every participant to really engage with each other and to interact with the variety of Nordic EMBL Partnership’s research areas. This focus came in the form of over 40 round table sessions that looked at everything from cancer cell biophysics, to unravelling gene-environment interactions in childhood aggression, to grant writing and science communication and more.

Many participants were keen to interact with topics that they had no prior experience of, making for some really useful and lively sessions.

“We really wanted to move away from the traditional scientific meeting format where participants have the tendency to take a passive role. With the round table format and sandwiched poster sessions, plus the technology breakouts, we hoped that we could put people together in meaningful ways, so that they might find connections they otherwise wouldn’t have identified.”  - Gretchen Repasky, scientific programme organizer at FIMM

The programme also included updates from the directors of each Nordic EMBL Partner, and the new partnership speaker, Professor Bernt Eric Uhlin, Director of MIMS, was also announced. Professor Uhlin takes over the role from Professor Kjetil Taskén, Director of NCMM.

Around 70 high quality scientific posters were presented by researchers from all four nodes, helping to provide plenty of talking points between talks and round table sessions. In addition, 12 breakout sessions, led by experts from within the Partnership, fostered small group discussions on a wide variety of technologies, e.g. metabolomics, structural biology, and sequencing. Attendees to the meeting were also given an exclusive preview of the new Nordic EMBL Partnership website, which is due to launch very shortly.

Young Investigators (PhD students and Postdocs) were invited to meet for two extra days prior to the main meeting for a program called Gear Up! to learn about effective communication, careers, and publishing, and to simply get to know one another better scientifically and socially. One highlight of their programme was the “Gear Up! SLAMit!” event, which saw Young Investigators present their research in creative and entertaining ways. The SLAMit winner, FIMM PhD student Alok Jaiswal, very kindly gave an excellent performance of his winning presentation to all meeting participants on the final evening of the meeting, during the conference dinner.

Another special programme focused on providing skills-based training to sixteen Group leaders and Associate Investigators, four from each node, in the form of an intensive ‘Negotiation – Attitude and Tools’ workshop, held between the 4-5 September, offered by Melissa Davies of NegoServices. This was received very positively.

“The course on “Negotiation Skills – Attitude and Tools” gave us hints on key aspects to consider during negotiations; from previous work that is required before the encounter, such as reflection on the roadmap and non-negotiable aspects, to the ideal structure of the actual meeting.

“We learned the importance of active listening, attitude and ways to communicate. Additionally, we worked in small groups, which promoted interaction among us in a very dynamic environment. I enjoyed the course very much, and would be really interested in a follow-up in the future!” – Lorena Arranz, Young Associate Investigator, NCMM.

The meeting also featured two inspiring keynote talks. The first came from Dr. Oliver Stegle, a Group Leader at the European Bioinformatics Institute (EMBL-EBI), who presented his talk, ‘Mapping genotype to phenotype relationships in polyomics iPSC cell models’ in the opening plenary session as a way to kick-off the meeting.

Closing the meeting, the second keynote talk came from Dr. Janet Kelso, a Group Leader at the Max Planck Institute for Evolutionary Anthropology, who gave a wide-ranging and fascinating talk titled, ‘The impact of admixture between modern and archaic humans’ sending participants home pondering the influence of Neanderthal DNA on modern humans.

“The Nordic EMBL partnership meeting is a forum for scientists of all levels to meet and discuss current issues of interest in a collegial atmosphere. At this meeting, perhaps more than at most, we realize that science is not done in a vacuum. We need a versatile toolkit of skills to ensure that our findings are recognised and acted on in the scientific community and by society.” – Jaakko Kaprio, Director of FIMM

A huge thank you to all of this year’s speakers, round table leaders and, last but not least, the team at FIMM for organising such a fantastic programme. We’re already looking forward to next year’s meeting, which will be organised by NCMM and will take place in Oslo in September 2018.