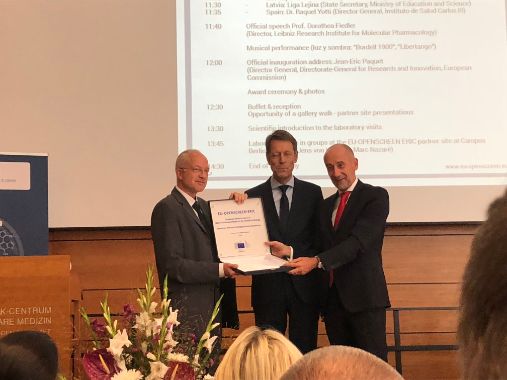 The EU-OPENSCREEN ERIC consists of 20 research institutes from seven European countries, including Norway. The ceremony was held on 25 September 2018 at the Max Delbrück Centre for Molecular Medicine in Berlin.

Jean Eric Paquet, Director General of DG Research and Innovation presented the ERIC certificate on behalf of the European Commission to Georg Schütte, State Secretary at the Federal Ministry of Education and Research (BMBF) Germany, and Dr. Wolfgang Fecke, Director General of EU-OPENSCREEN. Rebekka Borsch, Norwegian State Secretary in the Ministry of Education and Research, also gave an address on behalf of Norway.

The award of ERIC status to EU-OPENSCREEN means that the participating institutes will cooperate within a legal framework that eliminates regulatory barriers and simplifies access to shared resources. So far, ERIC status has been granted to 21 consortia across Europe.

Germany hosts EU-OPENSCREEN, which is located on the Campus Buch in Berlin. Norway, the Czech Republic, Latvia, Finland, Poland and Spain are the other founding members. Denmark is initially cooperating as an observer, and will become a full member from 2019.

NOR-OPENSCREEN is the Norwegian node of the ESFRI-project EU-OPENSCREEN, and represents the Chemical Biology and marine bioprospecting expertise in Norway.

Since 2016, NOR-OPENSCREEN has been on the Norwegian Roadmap for Research Infrastructure. The network was granted 33mNOK for chemical biology screening equipment from the Research Council of Norway in their last infrastructure call.