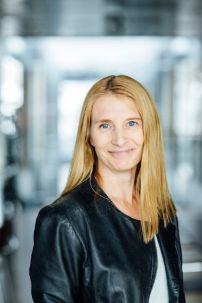 NCMM is delighted to announce that Dr Janna Saarela, currently Research Director and Deputy Director of FIMM, has been appointed as the Centre’s new Director.

Dr Saarela is currently head of the FIMM Technology Centre and an adjunct Professor in Medical Molecular Genetics at the University of Helsinki. Her research group at FIMM concentrates on the genomics of immune disorders, especially autoimmunity and immune dysregulation. She also has an MD from the University of Oulu, Finland.

The appointment follows the departure of Professor Kjetil Taskén, who left to take up a new role as Director of the Institute for Cancer Research at Oslo University Hospital in June 2018. The Selection Committee was led by Professor Giske Ursin, Director of the Cancer Registry of Norway, with the final and formal decision to appoint Dr Saarela made by the University of Oslo Hiring Board on 24 September 2018.

Professor Hartmut Luecke, Assistant Director of NCMM and head of the Structural Biology and Drug Discovery Group, has held the role of Acting Director since July 2018.

Plans to promote NCMM as a major, global player for molecular medicine and translational research

Dr Saarela’s research interests and clinical expertise, and focus on understanding the biological pathways and mechanisms behind immune disorders, fit extremely well with NCMM’s emphasis on translational research. Her work further complements that of several of NCMM’s existing research groups.

- I’m excited to start as the new Director of NCMM and, with the talented group leaders of the institute, strengthen the collaborative connections to University of Oslo and to Norway’s national hospitals and universities.

My overall vision is to continue developing and promoting NCMM to be a major player on the world-wide map of molecular medicine, with a translational mindset and team-oriented working culture. I’m proud to have the opportunity to continue evolving NCMM from the foundation of its current strengths, built under the directorship of Professor Kjetil Taskén.

Appointment enhances NCMM’s standing as a powerhouse for female scientists

Furthermore, Dr Saarela will become the first female director within the Nordic EMBL Partnership. Her appointment strengthens NCMM’s standing as a powerhouse for talented female scientists, with eight of the Centre’s 10 research groups now led by women.

Jens Petter Berg, Chair of the Board of NCMM comments:

- I am delighted to hear that Dr Janna Saarela has accepted the position as Director of NCMM. Her scientific capacity, strong leadership and vision for the future development of the Centre’s research in biotechnology and translational medicine make her the perfect choice for such a role.

I am also very proud that NCMM has recruited the first female Director in the Nordic EMBL Partnership. On behalf of the Board of NCMM I am very happy to welcome Dr Janna Saarela as the Centre’s new Director.

- I have known Janna for many years as one of the driving forces behind the remarkable performance of FIMM in human genetics and genomics.

I am sure that bringing her expertise to NCMM will open new and exciting possibilities to everyone there, and help bring their research to another level.

The appointment will also be of benefit to the Nordic EMBL Partnership for Molecular Medicine. Dr Saarela’s recruitment from the Partnership’s Finnish node will help to further strengthen links across the Partnership, and lead the way for more research collaborations between Finland and Norway.

Furthermore, Dr Saarela is involved in a number of active collaborations, such as the International Multiple Sclerosis Genetics Consortiums and the international consortia for Primary Immunodeficiencies, alongside involvement with EU projects, like MultipleMS. These links will help NCMM to increase involvement with other research environments in both Europe and further afield.

Alongside her appointment as Director, Dr Saarela will become a group leader at NCMM, and a Professor of Medicine at the University of Oslo. She will also have an adjunct researcher position at Oslo University Hospital.

- I congratulate NCMM on the appointment of their new Director. Janna Saarela is, in my opinion, an excellent scientist and leader. With her medical background and strong research programme she is optimally positioned to lead NCMM into the future and pursue new strategies in precision medicine and other areas.

I also take this opportunity to welcome Janna and congratulate her on her decision to join forces with the many excellent scientists at NCMM and the wider Norwegian research environment, in what I think will be a very interesting endeavour. I look forward to following NCMM and Janna’s progress in the future.

Janna Saarela received her M.D. in 1996, her Ph.D. in 1998 and has been a resident at the University Hospital of Oulu and the Hospital for Children and Adolescents, Helsinki University Central Hospital. She worked as a postdoctoral fellow at the National Public Health Institute, Finland (1998) and at the David Geffen School of Medicine at UCLA, Dept. Human Genetics (1998-2000).  Dr Saarela served as Senior Researcher, Head of the Biotechnology Unit, National Public Health Institute, 2000-2008. She set up the Biomedicum Biochip Centre core unit in 2001 and co-coordinated the unit, 2001- 2008.

Alongside her roles at FIMM, Dr Saarela is Adjunct Professor at the University of Helsinki in Medical Molecular Genetics (2008). She serves as scientific expert in several international groups, such as EU-LIFE, European network on rare primary immunodeficiency, autoinflammatory and autoimmune diseases (ERN RITA), and International MS Genetics consortium (IMSGC) and is involved in European expert groups for clinical NGS sequencing and personalized medicine.

About the Nordic EMBL Partnership for Molecular Medicine

The Nordic EMBL Partnership for Molecular Medicine is a unique network of excellent national research centers with complementary research expertise. The centers combine the longstanding tradition of basic and translational molecular medicine in the Nordic countries, with the research infrastructure, core principles and governance and operational models of the European Molecular Biology Laboratory (EMBL). The EMBL is Europe’s flagship laboratory for the life sciences, and is one of the world’s leading research institutions.

Visit www.nordicemblpartnership.org to find out more.