UiO Faculty of Medicine Centre for Molecular Medicine Norway
Main navigation
Back to uio.no
Sub navigation Menu
News and events > News > 2018 > New Chair of the Board for NCMM

New Chair of the Board for NCMM

Ragnhild Lothe has stepped down as Chair, and will be replaced by Jens Petter Berg 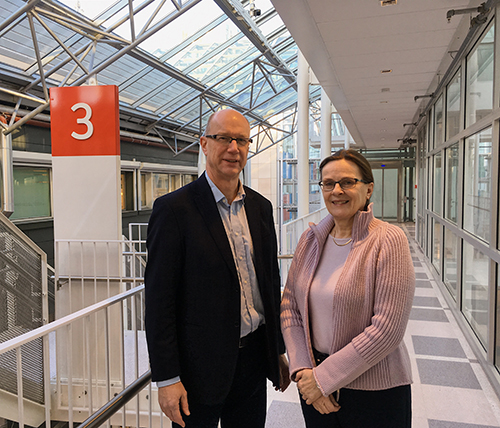 After ten years, Professor Ragnhild Lothe, Head of Department of Cancer Prevention at Oslo University Hospital and Professor at the Department of Molecular Biosciences at the University of Oslo, has stepped down from her role as Chair of the Board of NCMM. Professor Lothe has held the role since the Centre was established in 2008.

Since her initial appointment, NCMM has benefited hugely from the support and guidance of Professor Lothe in the wider research community. The Centre has grown from its early stages, successfully undergoing its first external evaluation, and becoming further established as a result of the merger between the Biotechnology Centre of Oslo (BiO) and NCMM in January 2016.

Since stepping down as Chair, Professor Lothe has been appointed as an NCMM Associate Investigator, meaning the Centre and its wider network will continue to benefit from her expertise and ongoing collaboration.

New Chair will bring fresh expertise to the role

Professor Jens Petter Berg, Head of the Department of Medical Biochemistry at Oslo University Hospital, has now been appointed as the new Chair of the Board of NCMM. Professor Berg has been affiliated with the Board since 2014, first as a substitute for the University of Oslo, before becoming a full Board member in 2016, representing the South-Eastern Norway Regional Health Authority (Helse Sør-Øst).

“I am very honoured to have been asked to succeed Ragnhild Lothe as Chair of the Board. I hope to be able to continue the excellent work and very high standards she has set.

I am looking forward to closely collaborating with all stakeholders to ensure that NCMM has a performance-enhancing culture and continues to function as a green-house for young talent, whilst promoting excellence, and facilitating translational research with university hospitals and the national network of associated investigators.

“This will be particularly important for the successful recruitment of a new director and two new group leaders, and the evaluation of NCMM by the Norwegian Research Council in 2018. I am also looking forward to learning more about the research performed at NCMM.”

Professor Berg adds, “Among the lessons I have learned from my time in research is the importance of being well prepared, to communicate clearly, to listen to and involve co-workers in order to define aims, implement measures and reach common goals.”

It has been great to work with Ragnhild Lothe as Chairwoman throughout the past 10 years of building NCMM. I have always valued our interactions and what we have been able to do together to promote NCMM. I have already learned to appreciate Jens Petter Berg from his service to NCMM as a Board Member, and look forward to working with him as the new Chair of the Board.

NCMM would like to thank Ragnhild Lothe for her outstanding service and contributions during her time as Chair of the Board. The Centre looks forward to future collaborations with her through her role as NCMM Associate Investigator.

About the NCMM Board

The NCMM Board is responsible for, in collaboration with the Director, the Centre’s overall coordination and progress. The Board steers and supervises NCMM’s activities and finances and does also approve the Center’s strategic plans, objectives and budget. The Board’s decisions contribute to promote excellence in the Centre’s recruitments, research, collaborations, and translational value.