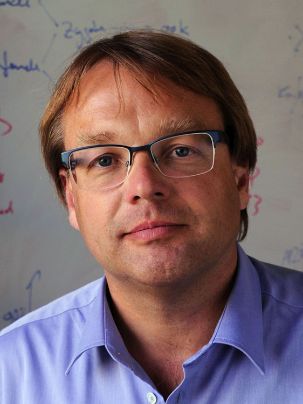 Dr. Oliver Billker is a distinguished expert in malaria parasite genomics. In October 2018 he will succeed the founding Director of MIMS, Professor Bernt Eric Uhlin, who has held the role since 2007.

The search committee, which was led by the chair of the MIMS Executive Board, Professor Carl-Henrik Heldin, also included Professor Iain Mattaj, Director General for EMBL (European Molecular Biology Laboratory).

“I am very pleased that Dr. Oliver Billker has accepted to be the next director of MIMS,” says Professor Carl-Henrik Heldin. “With his outstanding scientific credentials, extensive international network and excellent leadership skills, he is the perfect person to lead this very successful institute.”

-His experience in the large-scale genetics and genomics of malaria parasites and his participation in international collaborations will be valuable additions to the MIMS portfolio.

Billker studies how different species of Plasmodium, the parasites that cause malaria, spread between a human or animal host and mosquitoes, and how they use cues from their hosts to time mating and reproduction. Understanding the transmission of malaria is the key to the development of prevention and treatment strategies against the disease which still kills almost half a million people each year, most of them children under the age of five. Most recently his laboratory has been at the forefront of developing new genetic methods to study the biology of these important parasites.

Billker will hold a professorship in the Department of Molecular Biology, Umeå University from September 2018, the administrative home of MIMS and where several MIMS research groups are hosted and where he will set up his new laboratory.

“Starting at the very beginning of its 50-year history, Umeå University has built a strong reputation in infectious disease research, which I personally first became aware of during my postgraduate studies in London. Under the leadership of its founding director, Professor Bernt Eric Uhlin, MIMS has since come to represent this tradition, while placing it firmly in the context of molecular medicine research in Europe,” Billker says about his new workplace.

-I am impressed not only by the excellent research done at MIMS over the years, but also by the strong team spirit and sense of purpose shared by its scientists, which together with the committed support from the university account for its success.

Faced with many global challenges, infectious disease research alsoneeds to be global. I am therefore delighted to see MIMS in partnership with the other Nordic centres of excellence in molecular medicine and with the European Molecular Biology Laboratory in Heidelberg. I look forward to working with our partners, and I could not think of a better challenge than to help shape the future of MIMS as its future director”.

Born in Germany, Oliver Billker studied biology at Freie Universität Berlin. He earned his PhD from University of London for his thesis on “Regulation of Gametogenesis in Malaria Parasites”, which is based on studies that he performed at the Imperial College in London. Billker was from 1999-2002 postdoctoral fellow at the Max Planck Institute for Infection Biology in Berlin funded by an EMBO Long Term Fellowship and – as Marie Curie Fellow – postdoctoral fellow at the Imperial College in London. In 2003, he became Senior Research Fellow and five years later he earned associate professor status as Principle Research Fellow. Since 2007, he is Senior Group Leader at the Wellcome Trust Sanger Institute and one of the lead investigators for the PlasmoGEM project at the Wellcome Trust Sanger Institute Malaria Programme.