UiO Faculty of Medicine Centre for Molecular Medicine Norway
Main navigation
Back to uio.no
Sub navigation Menu
News and events > News > 2018 > Thank you and farewell to the Taskén Group

Thank you and farewell to the Taskén Group 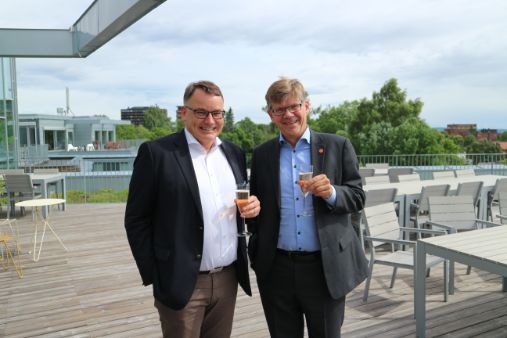 On behalf of all of NCMM, we would like to say a huge thank you and farewell to Professor Kjetil Taskén and his group.

A farewell party, attended by many of NCMM and Professor Taskén's current and former colleagues, including University of Oslo Rector, Svein Stølen and Dean of the Faculty of Medicine, Frode Vartdal, was held at Forskningsparken on Friday 22 June.

Professor Taskén has also been appointed as an NCMM Associate Investigator, meaning he will retain an affiliation with NCMM.

NCMM wishes Professor Taskén and his group all the best for the future.