Research led by Irep Gözen, head of the Bionanotechnology and Membrane Systems Group, is being presented at the Biophysical Society Annual Meeting in Baltimore, USA. The findings have also been highlighted in the Norwegian national newspaper, Aftenposten 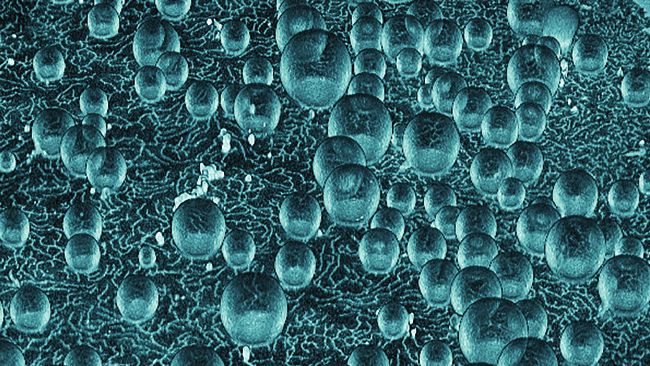 Spontaneously-formed protocells, which resemble balloons anchored to a surface by a network of ropes, are visualized by 3D confocal microscopy. Image: Irep Gözen

For life on Earth to form, a series of spontaneous events had to happen. Whilst there has previously been some understanding around this, exactly how these events happened has been a question that has long puzzled researchers. Now, research by the Gözen Group has helped to shed some light on how this process may have happened.

Findings could hold the key to the origins of life

Through bringing together components that include surfaces, fat molecules, and water - which were all thought to exist on earth shortly after it was formed - the group has been working to understand the easiest way to form so-called ‘protocells’, which are self organised collections of lipids thought to play a crucial role in the origins of life.

The group found that when lipids land on a surface, they self-organise into tiny cell-like containers without any external input. The significance of these findings, in terms of how life on earth may have started, is that the formation of these cell-like containers is a very simple process. All that is needed is a sufficient number of lipids, a suitable surface, and water. Lipids could have easily existed in the very early stages of Earth, as suggested by lipid traces found in fossils and meteorites.

In terms of how genetic material may have then entered these protocells, the group found that large organic molecules similar in size to DNA’s building blocks can spontaneously enter these protocells while they grow. Both of these events are crucial steps towards forming a functioning cell.

Dr Gözen and members of her group are now presenting their research at the 63rdannual meeting of the Biophysical Society in Baltimore, Maryland, USA, which runs from 2-6 March 2019.

The research has been highlighted by the Biophysical Society’s news team, and included in the organisation’s ‘Newsroom’ round-up of the most exciting research presented at the meeting.

The news has also been picked up by a number of media outlets:

Findings may help us to understand how other planets developed

The group will now work with biologists and geologists to further investigate the combinations of minerals and fat molecules derived from the oldest bacterial cultures known on earth.

Whilst there is still a long way to go before the entire evolutionary process can be understood and re-created in a laboratory, the research could be a crucial step towards understanding how non-living matter evolved into life. The findings could also help scientists to better understand how other planets, in particular, Mars, may have developed.