New work from the group led by Nikolina Sekulic at NCMM has been published in EMBO Reports. 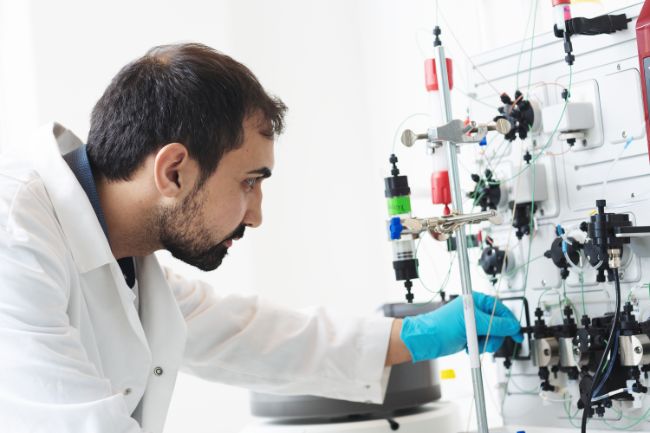 First author of the paper Ahmad Ali-Ahmad at work in the lab. Photo: Nadia Frantsen

The study sheds light on the structure of nucleosomes contained within the centromere; findings that will help to improve our understanding of the important molecular events that drive cell mitosis.

Nucleosomes within the centromere: different, but how?

All chromosomes in human cells contain structural subunits called nucleosomes, which are composed of DNA tightly wrapped around proteins, called 'histones'. These nucleosomes help to tightly package DNA within the nucleus, only allowing certain regions of DNA to be ‘unwrapped’ when necessary; for example, for transcription of genes contained within that region of DNA.

The centromere is a chromosomal locus that directs accurate segregation of DNA into two new daughter cells during mitosis. Defects in this process can lead to an abnormal number of chromosomes in cells, so called ‘aneuploidy’, which is linked to a number of disorders including cancer.

For a long time, it was believed that specific DNA sequences, particularly those rich in the DNA subunits adenine (A) and thymidine (T), defined the centromeric locus on chromosomes. However, the discovery that functional centromeres can form on other parts of the chromosome, in the absence of these A- and T-rich DNA sequences, has led to the notion that centromeres are defined by other factors that are not encoded within DNA sequences themselves, so-called ‘epigenetic’ changes. More specifically, the presence of a specialized nucleosome containing a centromere-specific variant of histone H3 called CENP-A (centromere protein A) is now known to be sufficient to establish functional centromeres.

In their new publication, the Sekulic Group aimed to answer the above questions. To do so, they used a technique called cryogenic electron microscopy (cryo-EM) to produce a high-resolution depiction of the structure of CENP-A nucleosomes. This was performed both for nucleosomes in isolation, as well as when bound to a protein called CENP-C, which can directly bind CENP-A nucleosomes and subsequently recruits many other proteins to the centromere.

The cryo-EM approach confirmed that the DNA wrapped around the CENP-A-containing nucleosome is more flexible, a propensity that is orchestrated solely by CENP-A, and occurred independently of the DNA sequence involved.

The group went on to demonstrate that the binding of CENP-C to CENP-A nucleosomes further exaggerates this DNA flexibility, probably generating unique chromatin features required for centromere formation. Furthermore, they established that two different regions of CENP-C both make complexes with CENP-A, and not normal nucleosomes. This led to the proposal that CENP-C works as a “cross-linker” between CENP-A nucleosomes and organizes them so to make a platform for a functional centromere.

Discussing the publication, Dr Sekulic said “This work was performed almost entirely by a very talented and dedicated postdoc from my lab, Ahmad Ali-Ahmad who trouble-shooted a number of problems along the way and performed all of the biochemical experiments. We are also extremely happy to collaborate with the Halic lab in St. Jude’s Children Hospital (TN, USA), who have the necessary expertise and access to state-of-the-art cryo-EM instruments."

Developments in cryo-EM are transforming scientific research and we hope that Norway will soon have its own instrument that will give us more flexibility and independence in reaching our research goals.

Discussing the impact of the work, Dr Sekulic said, “These findings represent an important milestone in our attempts to gain a comprehensive understanding of the important molecular events that drive mitosis. The better we understand these processes, the better we can potentially treat the conditions that arise when they go wrong.”

To read the paper, "CENP‐C unwraps the human CENP‐A nucleosome through the H2A C‐terminal tail" in full, visit the EMBO Reports website.

More information on the Sekulic Group and their research can be found on the NCMM website.

You can also read more about the ongoing attempts to bring cryo-EM to Norway in this previous NCMM news article.