The origin of life on Earth is one of humankind’s greatest open questions. Researchers at NCMM wanted to investigate how the transition from non-living to living matter on the early-Earth took place by studying how molecules like DNA and RNA are exchanged between primitive cells 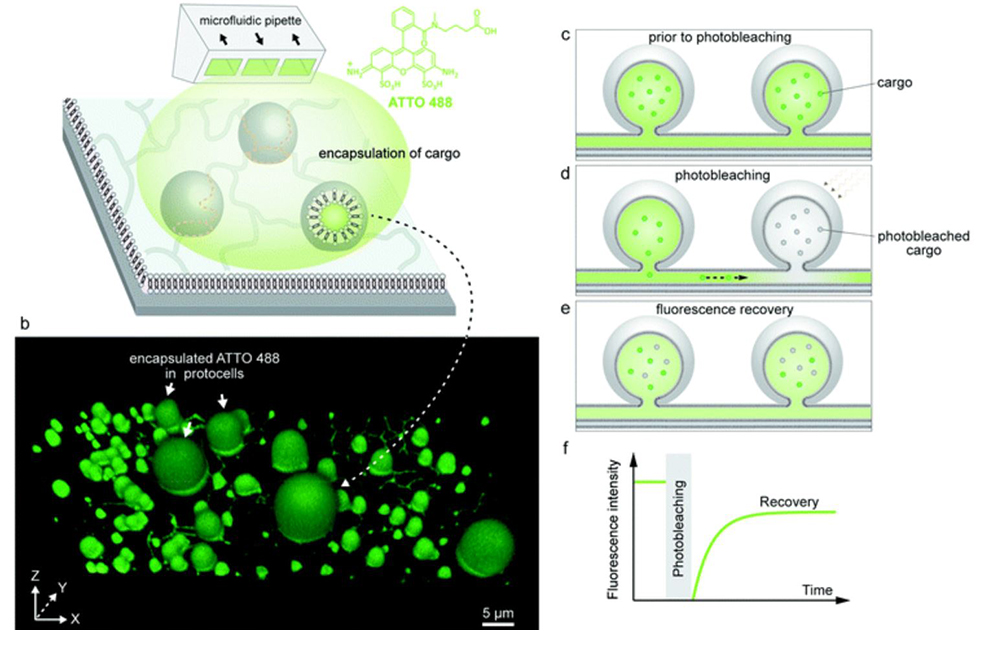 One of the most well-known theories of how life emerged and propagated on Earth is the RNA world theory – that life on Earth began with an RNA molecule that then replicated itself, resulting in daughter cells that eventually evolved into living organisms. However, the conditions that promote life on the Earth today are completely different to the early Earth 4 billion years ago. Therefore, the question of how life could have emerged from lifeless matter under the harsh conditions of the early Earth remains one of science’s greatest and most complicated puzzles. Researchers in the Gözen group at NCMM have been looking at whether nanotubular networks between lipid compartments could explain how non-living, cell-like structures eventually developed into living cells.

Protocells – the theoretical ancestor of the primitive cell

Cells must be able to communicate with their surroundings in order to self-replicate and grow. For example, modern cells can secrete hormones that are recognised by other cells. On the early Earth, much simpler, non-living structures would somehow create the framework for the first primitive cells. These structures are called protocells. In a new article in the Nanoscale journal, researchers at NCMM have constructed protocells to simulate how they could have gained the ability to communicate and self-replicate despite lacking the necessary features and environment that modern, living cells have.

They found that when they deposited lipid material onto a mineral surface, like the minerals abundant on the Earth in ancient times, the lipids spontaneously formed cell-like compartments connected by tiny nanotubes.

— We deposited lipids into an aqueous environment on a silicon oxide surface and then a network structure autonomously formed by itself. The lipids formed vesicular structures which are connected by lipid nanotubes, explains researcher Ingrid Jin Schanke

From non-living matter to living cells

The researchers discovered that the nanotubes that formed between the protocell compartments were able to transport molecules that are important for the development of cellular life – such as RNA. This could be an explanation for how the simple protocells on the early Earth were able to communicate with their environment and eventually self-replicate and evolve into living cells.

— We knew we could encapsulate materials into these protocell structures, but we didn’t know whether the content within them could be exchanged between the lipid nanotubes. On the ancient Earth, there might have been very simple RNA structures that were able to grow and eventually become more advanced. We wanted to see if these simple RNA structures could be transported through the nanotubes , explained Schanke

Scientists will never be able to fully explain how life emerged on the early Earth billions of years ago, but the discovery has the potential of getting us closer to an answer.

— The protocell compartments form on their own with only surface energy and are closed environments where reactions can happen inside of them and between them. I would say we have a good hypothesis! The more we know about how life could have started, the more we can learn about how to preserve it and how to fix things something when it becomes suboptimal, said Schanke