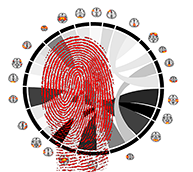 The researchers analyzed brain imaging data from a large number of children and adolescents and report that there is a developmental delay in the individualization of brain connections in individuals with early symptoms of mental illness. These novel findings suggest that such brain network maturation during the course of childhood and adolescence reflects an important aspect of healthy brain development, and reveal the detrimental paths that brain plasticity can take during adolescence.

Read more about the study in Science Daily, Medical News Today, and Dagens Medisin (in Norwegian).

The study is also discussed on the Schizophrenia Research Forum and in Nature Neuroscience.