A spotlight on women’s brain health: How do hormones affect the female brain? 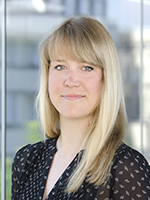 There are well-established sex differences in the prevalence and representation of numerous illnesses affecting the brain. Relative to men, women are at greater risk of developing Alzheimer’s disease (AD), for instance, and show higher prevalence of mental disorders such as depression. While men have a 40% higher likelihood of developing schizophrenia during late adolescence and early adulthood, women show a distinct peak in incidence rates later in life - during the transition to menopause. Yet women's brain health is historically understudied, and little is therefore known about how female-specific factors including exposure to sex hormones such as estradiol (a type of estrogen) shape women’s brain health across the lifespan. Estradiol is not stable, but rather fluctuates over the course of each menstrual cycle, then rapidly increases during pregnancy, and declines postpartum and during the transition to menopause (Fig.1). These different levels of exposure to estradiol may influence women’s risk of AD, depression or schizophrenia, but precisely how such exposure affects normal brain aging is largely unknown.

Sex hormones and the brain

To address this gap in research, we used neuroimaging, hormone and genetic data of 16,854 middle to older-aged women from a large-scale database from the United Kingdom (UK Biobank). The results indicated that higher levels of lifetime exposure to sex hormones may have adverse effects on the brain, as opposed to a history of previous childbirths, which may have beneficial effects [1]. Pregnancies may modulate women’s exposure to estradiol, which could possibly contribute to favorable brain aging trajectories later in life. As described in our review [2] and previous studies [3, 4], other pregnancy-related mechanisms, including changes in immune regulations and brain plasticity, may also have implications for women's brain aging trajectories.

Furthermore, we show that genetic factors contribute to how the timing of hormone replacement therapy (HRT) initiation might affect women's brain aging. Starting treatment early, before menopause, was associated with less evident brain aging, but only in women with a genetic risk for AD. As millions of women world-wide use hormone replacements to treat menopausal symptoms, research targeting the effects and consequences of HRT are crucial to supporting women's health care and informed development of preventive interventions. In a next step, we aim to disentangle the effects of different HRT formulations (i.e., estrogens plus progestin or estrogens alone) on women’s brain health later in life.