The genetic architecture of complex disorders 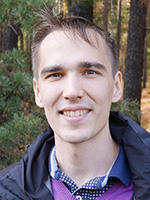 Recent research has shown that our genes are involved in the development of many common disorders, including cancer, dementia, and schizophrenia. These disorders seem to implicate thousands of gene variants and not only one single gene, making them quite challenging to study and understand. Therefore, advanced methods are needed to analyze the data.

In my postdoc project, we develop novel statistical tools to study the genetic complexity across a number of disorders, including schizophrenia. Our aim is to get a better understanding of these disorders, and in the long term use this knowledge to improve diagnostics and treatment.

One or many genes?

Several human characteristics, such as blood type and freckles, are so-called Mendelian traits which means that they are controlled by one single gene. The same applies to some illnesses, including Huntington's disease and cystic fibrosis, which are both dependent on one gene with a strong effect.

Complex traits, on the other hand, are human characteristics that are affected by a large number of gene variants, but each of them has only a tiny effect. Depression, cancer, dementia, and schizophrenia are all examples of diseases that are considered to be complex traits. Several of these diseases are highly heritable and run in families, such as schizophrenia which has a heritability of up to 80 %, but only a limited amount of the heritable component has been identified. Therefore, more research is needed to find this "missing link" between gene variants and disease.

Recent progress in genetic analysis has made it possible to "scan" our complete set of genes. Thousands of gene variants that are associated with various traits and disorders have been identified using an approach called genome-wide association studies (GWAS). This approach has provided interesting new opportunities to investigate complex traits like depression and schizophrenia, but it also has several challenges, including the need for data from a huge number of individuals to obtain robust results.

Thanks to large international collaboration studies, it is now possible to use the GWAS approach in a fruitful way by combining gene data from thousands of individuals around the world. At NORMENT, we are involved in several international consortia related to genes and mental illness. The results from these studies may then be used in further analyses to dig deeper into the underlying genetic architecture of various traits and disorders.

In my postdoc project, I am currently involved in the development of novel statistical methods for gene analysis based on results from GWAS. Using these methods, we have already succeeded in gaining more robust and reliable results for several complex traits, including schizophrenia, bipolar disorder, and ADHD [1, 2].

My core research project is focused on the genetic overlap between different complex traits. It is well known that many traits and disorders have a shared genetic component, in other words that the same genes are involved in several different traits. Using a novel statistical method called bivariate causal mixture model with annotations (BCMMA), we have been able to get more detailed information about these overlapping genes, including the degree of the overlap and its localization in the gene set.

In the coming years, we will continue developing new tools that can help increasing our understanding of the genetic architecture of complex traits and disorders. The aim in the long term is that such knowledge can be used to facilitate better diagnostics and treatment in the clinical setting.