In my postdoctoral project, I am exploring the underlying neural correlates of interindividual differences in auditory attentional control. Furthermore, my research focuses on the complex metabolic mechanisms of the blood oxygen level-dependent (BOLD) signal. In general, my work aims at developing “healthy human models” that can be translated to clinical research. 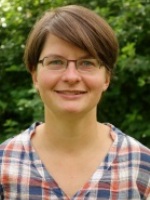 Focusing attention on relevant while rejecting irrelevant perceptually more salient information is cognitively demanding and compromised in schizophrenia patients. The underlying correlates of interindividual differences in this ability are still not completely understood.

Applying electroencephalography (EEG) while participants were conducting a dichotic listening task in which they had to focus on relevant and ignore irrelevant auditory information, we could show that the amplitude of a late negative event-related potential (ERP) was modulated by the cognitive control demand of this task (N450 modulation effect). Critically, this N450 modulation effect was significantly positively correlated with task performance. Following up on this finding, we recently combined proton magnetic resonance spectroscopy (1H-MRS) and EEG to investigate whether the N450 modulation effect is mediated by glutamatergic neurotransmission in the anterior cingulate cortex (ACC), a region critically involved in cognitive control processes. We found a significant positive correlation between interindividual differences in glutamatergic neurotransmission in the ACC and the magnitude of the N450 modulation effect.

Functional magnetic resonance imaging (fMRI) has advanced our understanding of differences in brain function between healthy controls and schizophrenia patients. For instance, compared to healthy controls resting-state functional connectivity in the default-mode network (DMN) is hyperactive and its down-regulation is impaired in schizophrenia patients. However, the complex neurophysiological and metabolic mechanisms of the blood oxygen level-dependent (BOLD) signal, fMRI research is based on, are still not clear.

Taken together our research provides further evidence for a critical role of glutamatergic neurotransmission in how our brain implements cognitive control and may represent a hint towards a glutamate-related dysregulation in schizophrenia patients. Furthermore, combining multiple imaging methods is a promising tool, to uncover the underlying mechanisms of the BOLD signal. Future studies translating this approach to clinical research will contribute to a further understanding of patient- and control-group differences observed in fMRI research.