A Norwegian study shows that a new type of polyp is associated with increased risk of colorectal cancer, but the polyp itself may not develop into cancer. 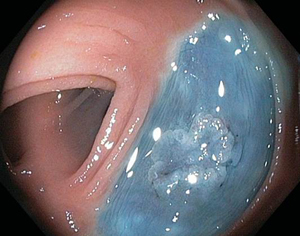 Polyp in the colon.

Today, it is widely accepted that adenomas (a type of polyp in the colon and rectum) may develop into cancer. The risk is particularly pronounced in adenomas displaying certain unfavourable characteristics (high-risk adenomas). Removal of these polyps has been shown to reduce incidence and mortality of colorectal cancer.

Recently it has been suggested that also another type of polyp in the large intestine, the serrated polyps, may be associated with colorectal cancer. Until a few years ago, these polyps were regarded as harmless.

- We do not know much about these polyps, neither how much they increase cancer risk nor how fast they may develop from polyp to cancer. We are also not sure about how often we should offer individuals surveillance colonoscopy after removal of a serrated polyp, says researcher Øyvind Holme from Sorlandet Hospital Kristiansand.

Holme and colleagues have now investigated colorectal cancer risk in persons with serrated polyps in the large NORCCAP trial. In this trial, about 13,000 people from the City of Oslo and Telemark County was screened with flexible sigmoidoscopy between 1999 and 2001. The participants were classified according to polyp type detected at screening and followed for 11 years. The results are published in GUT.

A surprising finding was that the cancer in persons with serrated polyps often developed in another segment of the large intestine than where the serrated polyp was located. Further, the investigators also found that serrated polyps which were not removed during screening in 1999-2001, did not develop into cancer.

- The interpretation of these observations may be that the colorectal cancer risk is not related to the polyp itself, but that the serrated polyp is a marker of an increased cancer risk in the entire large intestine, Holme explains.

The researchers believe that these findings will be important for how we treat and follow individuals with serrated polyps.