The research group has a wide range of projects within its area of expertise.

Compartmentation of receptor-mediated signalling in cardiomyocytes 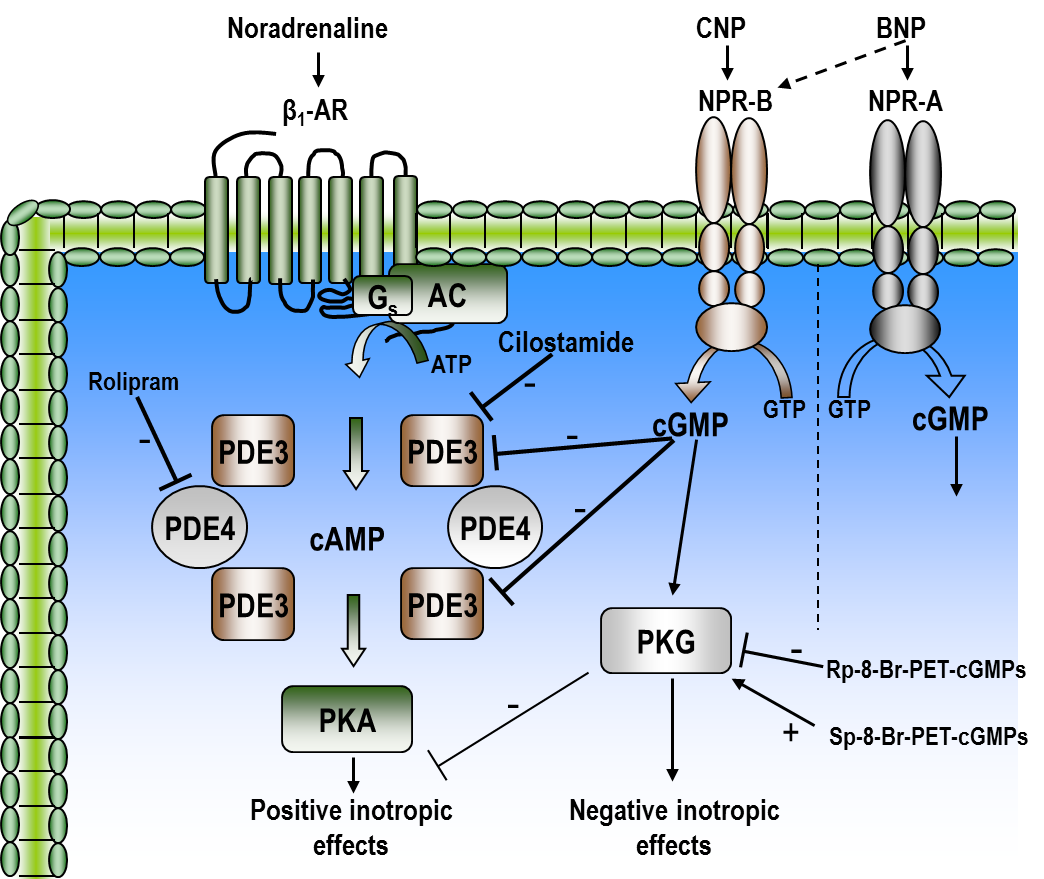 Recently, we also found functional evidence for compartmentation of the cGMP signal in the heart. The two natriuretic peptides brain natriuretic peptide (BNP) and C-type natriuretic peptide (CNP) are increased in heart failure and both increase cGMP through stimulation of particulate guanylyl cyclases (NPR-A and NPR-B respectively). However, we only find an influence of CNP on contractility and not BNP, in the presence of β1-AR and 5-HT4 receptor-stimulation. Levels of cyclic nucleotides (cAMP and cGMP) are degraded by phosphodiesterases (PDEs) and this contributes to regulate the contractile effects mediated by both cAMP and cGMP. We found that both PDE3 and PDE4 were important in regulating β1-AR- and 5-HT4-receptor-induced inotropic and lusitropic responses in normal rat left ventricular muscle strips.

However, in heart failure, the inotropic and lusitropic response is mainly regulated by PDE3 with a role of PDE4 demasked when PDE3 is inhibited. Further, we see that PDE3 is involved in the cross-talk between the cGMP- and cAMP-signalling systems. Although it is becoming clear that different receptors and effectors are located in different compartments, the reasons why some are affecting contractility, whereas others are not and what causes the organization of this compartmentation is far from clear. These are questions we are continuously working on in the group.

One facet of our research investigates the role of prostanoids and muscarinic receptor signaling to modify calcium sensitization of myofilaments in failing rat and human heart. Particular focus is upon the signaling mechanisms mediating regulation of the phosphorylation state of myosin light chain and its contribution to inotropic support in failing myocardium. Muscarinic receptors also regulate the beta-adrenergic signaling pathway and inotropic response through activation of inhibitory G protein (Gi). A second facet of this project investigates the role of Gi in the regulation and compartmentation of cAMP-mediated inotropic and lusitropic effects in the normal and failing ventricle.

In cardiac ventricle, cGMP produced via CNP stimulation of NPR-B (natriuretic peptide receptor-B) was previously found to reduce degradation of cAMP through phosphodiesterase inhibition (see below: “Compartmentation of receptor-mediated signalling in cardiomyocytes “). An increased inotropic effect was thus seen upon beta-adrenergic activation. During heart failure, enhanced cAMP-mediated signalling is deleterious, suggesting that the cardio-excitatory effect of NPR-B stimulation may have long-term harmful effects in heart failure patients.

We have set up an assay (Alpha Screen) for  high-throughput screening of low molecular weight compounds and screened a chemical library of about 20,000 compounds (<500 Da) in collaboration with the The Biotechnology Centre of Oslo. We have identified several “hit” compounds that inhibited CNP-stimulated cGMP production in NPR-B expressing HEK293 cells. These compounds will be further tested and evaluated. Development of clinically useful drug substances will then be considered.

One facet of our research focuses on novel inotropic drugs. Of particular interest are drugs that influence inotropic responses without influencing cAMP-levels.

Recently, drugs working by sensitizing the myofilaments to calcium and drugs that work by increasing activation of myosin heads in the contractile response of the myocardium have been developed. These drugs need to be characterized with respect to both their inotropic and lusitropic properties. Many drugs have multiple mechanisms which affect the cardiomyocytes both with respect to signaling mechanisms and inotropic response and the individual characterization of these mechanisms is important as some mechanisms have detrimental effect in the treatment of heart failure.

By applying different agonists and antagonists to the cardiomyocytes and living cardiac tissue, we can differentiate between mechanisms and more fully understand the response from the drugs. Additionally, we aim to clarify how these drug types influence well known receptor-mediated (e.g. through alpha- and beta-adrenergic receptors) and other signaling pathways which are important in heart failure. Any potential influences on these systems are important to the clinical application of the drugs.

In classic pharmacology, G-protein-coupled receptors (GPCRs), G proteins and effectors interact sequentially by random collision. Signaling through GPCRs is both specific and very rapid, indicating that the proteins are efficiently organized. Currently, there are two prevailing views on how receptors, G proteins and effectors are organized; either preassembled in one complex (preassociated/precoupled) or interacting after receptor-activation (collision-coupling) in discrete microdomains.

We have previously compared signaling of the Gs-coupled 5-HT4 and 5-HT7 serotonin receptors which revealed fundamental differences in G protein activation. Whereas 5-HT4 receptor function is consistent with collision-coupling, the unusual pharmacological properties exhibited by 5-HT7 receptors can best fit a model with receptor and Gs preassociated in the absence of ligand, thus limiting the availability of G protein for other receptors. We are currently investigating this receptor-G protein interaction by the use of Fluorescence Resonance Energy Transfer (FRET).

Functional selectivity at the 5-HT7 receptor

Traditionally, ligands of G-protein-coupled receptors have been classified primarily by their affinity and efficacy to activate a signal transduction pathway.

More recent reports indicate that the efficacy of a particular ligand can vary depending on the receptor-mediated response measured. A traditional antagonist (when measuring G protein activation) could in fact activate MAP kinases or induce receptor desensitization and internalization and thereby be seen as an agonist on the latter processes.

We have reported that some inverse agonists towards the 5-HT7 serotonin receptor induce both homo- and heterologous desensitization, similar to agonist-stimulation. We are currently investigating how ligands towards the 5-HT7 receptor mediate functional selectivity.