The Centre for Global Health is inviting leading researchers, institutions and policy makers to hear about their experiences and latest findings in the fields of mental health and conflict at an open seminar within the yearly Global Mental Health Day. The Save the Children photo exhibit "Children fleeing ISIS" will be displayed for the first time in Norway. 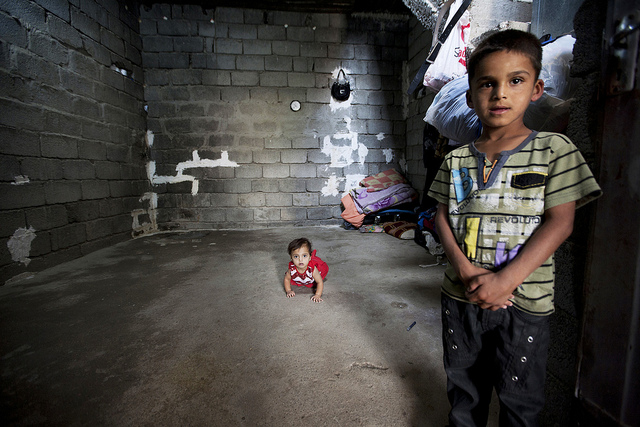 We ask you to please inform us if you have signed up and for unforeseen reasons cannot attend.

Mental health care is receiving increasing attention and its practice is now also established in low income countries. Despite the cumulating evidence that mental health is especially important in conflict and post-conflict countries, the scope of the problem and limited resources available create a major challenge for addressing mental health in a global context.

The World Health Organization (WHO) and many other global partners have progressively scaled up their activities on certain aspects of mental health, such as substance abuse which is also a specific target of the Sustainable Development Goals. However, on the other side major mental health problems have been left out of the UN Development Agenda.

Current evidence shows that populations affected by conflict can have more than a 5-fold increase of mental illnesses such as depression, anxiety, post-traumatic stress disorders (PTSD), substance abuse and secondary symptoms such as sleeplessness, irritability and hopelessness – all of which interfere with the normal healthy functioning of people and communities. Mental illness and psychosocial disorders, if not treated, can be long-lasting, debilitating and progressive. They can worsen into psychosis, manifest into further violence, such as criminal activity and domestic violence, and the trauma can be passed on to the children and future generations, as demonstrated by Nazi Holocaust survivors and children living in Cambodia. Children are especially vulnerable in conflict settings in their developmental years.

Studies of refugee populations show that, depending on the country of origin and level of conflict, acute clinical depression and PTSD varies between 40% and 70%. Initial studies of refugees from Bosnia and Herzegovina showed that 45% of the refugees suffered from psychiatric symptoms and 25% were disabled due to these symptoms. According to the International Organization for Migration, in 2015 the highest levels of forced displacement globally were recorded since World War II, with a dramatic increase in the number of refugees, asylum-seekers and internally displaced people across various regions of the world.

The current evidence demonstrates that conflict affected populations including refugees suffer from mental illness at a much higher level than non-conflict affected populations. These issues last for many years after the conflict is over or after refugees have settled in other countries. Furthermore, future generations can be affected by the trauma and violence experienced by their parents. Thus, there is a great need to underline the issue of mental ill health  in conflict and post conflict situations. We are therefore inviting the leading researchers, institutions and policy makers to hear about their experiences and the latest findings in this field.