Report: Lancet One Health Commissioner Peter Daszak is Back in Oslo

Professor Peter Daszak, President of the EcoHealth Alliance and Commissioner in the Lancet One Health Commission chaired by the Centre for Global Health (CGH) at UiO, gave a talk to a captivated multidisciplinary audience at the Norwegian Veterinary Institute in Oslo on August 28th. 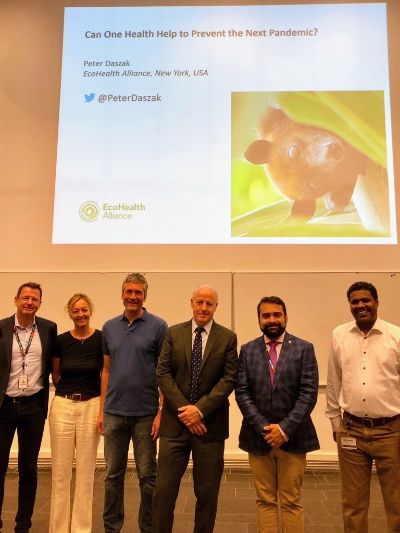 Predicting the next pandemic with One Health

In his invited lecture on “Can One Health Help Prevent the Next Pandemic?” Prof. Daszak talked about how emerging infectious diseases are a growing global threat. These diseases are complex and hard to predict. Many of these emerging diseases are zoonotic, meaning that they can spread form animals to humans. A One Health approach, which recognises the interaction between humans, animals and the environment could help disease prediction and preparedness.

He talked about his extensive work on these emerging infectious diseases, from researching the origins of deadly outbreaks of Nipah virus in Malaysia and SARS in China, to mapping hotspots for emerging diseases around the world. He discussed the interrelated roles of human population density, wildlife diversity and environmental change and how we can use awareness of these risk factors to predict where the next big viral diseases will emerge. He used the example of how land use change, through for example deforestation, can disturb ecosystems and affect wildlife. Wildlife such as bats and rodents are carriers for some of the world’s most dangerous viruses, including Ebola. They and other mammals are also likely carriers of yet unknown viruses.

Prof. Daszak further argued for the need for global research initiatives focused on identifying unknown viruses. Though costly, the early identification of these potentially deadly threats could help reduce the cost and global burden of disease. He highlighted the ongoing Global Virome Project, which is an international initiative aiming to do just that.

To deal with emerging infectious diseases we need to consider human, animal and environmental issues. This means involving experts from many different fields including ecologists, veterinarians and social scientists. Following a question from the audience, Prof. Daszak discussed how medical doctors also need to be involved, but that there needs to be more engagement with the medical community.

Prof. Daszak concluded his talk by saying that these diseases are a long-term, existential risk to our species, but that they are also diseases we can do something about. There is value in investing in this kind of research.

By Marianne Carson
E-mail this page