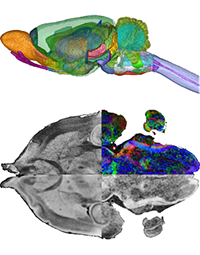 Spatial reference is provided by the Waxholm Space coordinate system. The location of bregma and lambda are identified as anchors towards stereotaxic space.

Application areas include localization of signal in non-structural images e.g. functional or pharmacological MRI and PET, or assignation of location to features extracted from microscopic images from histological sections.

LFPy is a Python package for calculation of extracellular potentials from biophysically detailed (multicompartmental) neuron models and networks of such neurons. It relies on the NEURON simulator.

ViSAPy (Virtual Spiking Activity in Python) is a tool for model-based generation of biophysically-realistic benchmarking data for evaluation of automatic spike-sorting algorithms.

Virtual MEA measurements in Python (ViMEAPy) is a Python toolbox for calculating and analysing the extracellular potential measured in an in vitro slice setting, where a slice of neural tissue is immersed in saline on top of a Microelectrode Array (MEA).

Uncertainpy is a Python toolbox for uncertainty quantification and sensitivity analysis of computational models of the types used in neuroscience.

pyLGN is a simulator of spatiotemporal cell responses to visual stimuli in the early part of the visual system, that is, the retina, lateral geniculate nucleus (LGN) and primary visual cortex. The simulator is based on a mechanistic, firing-rate model that incorporates the influence of thalamocortical loops, in addition to the feedforward connections.

The Experimental Directory Structure (Exdir) is a proposed, open file format specification for experimental pipelines. Exdir uses the same abstractions as HDF5 and is compatible with the HDF5 Abstract Data Model, but stores data and metadata in directories instead of in a single file.