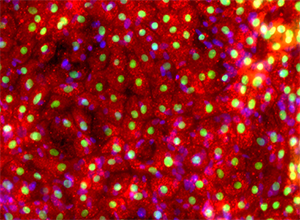 Researcher Gareth Sullivan and his team at the Institute of Basic Medical Sciences have recently published a study where they show that small molecules can be used to make hepatocytes from stem cells.

This, according to the researchers, will potentially benefit patients – as access to lab made hepatocytes will provide us with a better understanding of adverse drug reactions, drug metabolism, and liver disease, leading to more effective treatments.

In addition, the cost to generate functional hepatocytes has been massively reduced, potentially making bioartificial liver devices based on human hepatocytes a reality.

Today the assessment of drugs prior to release to the general public, are tested in animals. However, animal models don´t always replicate the way a person handles these drugs and administration to a patient can lead to so called “adverse drug reaction”. To minimize these unfortunate side effects there is a need for models that replicate the way humans handle drugs.

“Hepatocytes are used in many areas within research and the pharmaceutical industry, including drug testing. But the best quality cells are reserved for liver transplants,” says Sullivan. Thus there is a need for alternatives, and the Sullivan group has developed a method that will fill this void.

When natural liver cells are extremely limited in supply and of mixed quality, the answer is to synthesize hepatocytes from so called induced pluripotent stem cells (iPSCs). iPSCs can be generated by converting for example skin cells to an embryonic like stem cell. These cells have the ability to be converted to potentially any cell type of the body, including liver cells.

“The problem has been to reproduce these cell types at a high enough quality and at a price that enables researchers to use them routinely in the lab,” says Sullivan.

Until now growth factors have been the obvious choice to convert stems cells into liver cells. Growth factors are natural protein compounds in our body, and their job is to give a cell a cue to differentiate into another cell type.

It’s a difficult process to replicate in the lab, as the cell has to be “converted” in multiple steps. It requires different types of growth factor for every stage. In addition growth factors are expensive, and very variable in quality and potency.

“Labs will likely have to pay several thousands of kroner to make a batch of a few million cells, a small number in a lab context,” says Rick Siller who is a PhD student in Sullivans group and first author of the study.

Another problem is that growth factors based procedures for the production of liver cells are often difficult to reproduce.

Small molecules on the other hand, are off-the-shelf chemical compounds at a considerably lower cost. 90 percent of drugs are made from small molecules.

Sullivan and his team had to go through a vast amount of research literature to figure out what small molecules (that imitate the growth factors) might nudge the cell in the right direction.

The result was uplifting. Hepatocyte-like-cells produced from small molecule driven procedure were by all standards equivalent to those made by growth factors in terms of their function.

And importantly, the procedure was very robust and cost-effective.

Are 3D-printed livers next?

The finding, says Sullivan, is a big step towards the realization of personalized medicine, a buzzword within medical sciences.

An important reason for why liver disease and adverse drug reactions are so challenging, is the huge genetic diversity within the population. That is why one person can have a life threatening reaction to a prescribed medicine that is completely harmless to another.

As hepatocytes from a single donor will never be representative of the entire population, creating a library containing the variations within a population is one of many applications that would require a large-scale production of hepatocyte-like cells. This could provide a way of assessing drug reaction prior to clinical trials.

An even more spectacular application might be artificial livers. 3D-priniting is already being used for making artificial tissue.

"Maybe we will one day see a 3D-printed liver entirely built up by synthetic liver cells", says Sullivan

The Sullivan group, in collaboration with professor Laurence Bindoff at the University og Bergen and researcher Runar Almaas at the Oslo University Hospital, is now employing these cells to investigate diseases that affect the liver, in particular pediatric metabolic disorders. The aim is to improve our understanding of these debilitating diseases and for developing better and more specific treatments.

By Sigurd Øygarden Flæten and Gareth Sullivan
E-mail this page