The gene that harms and protects us

We all have a gene than can cause lethal blood clots, but also protect us against cell death during a stroke. This raises a dilemma for scientists. 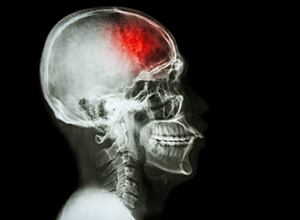 One in twenty Europeans has a mutated variant of the so-called FSAP-gene. Studies have shown that the mutation makes this group more prone to stroke.

This gave a hint to the researchers in the research group “Vascular Patho-physiology” at the Institute of Basic Medical Sciences in Oslo – Learning more about the gene could reveal new ways to address one of our biggest global health challenges. Stroke and heart attack are among our most frequent causes of death and disability.

The findings surprised the scientists – The FSAP gene turned out to have a split personality.

"It is called “the FSAP gene” because it produces FSAP, a protein that plays an important role in regulating  blood coagulation. Together with other factors, it contributes to our blood having just the right thickness," says Professor Sandip Kanse, head of the research group.

In fact, we are all sitting on a knife-edge –  a slight disturbance of the balance can prove lethal.

It can be compared to adding cornstarch to a sauce. Too little of the FSAP protein makes our blood very thin and prevents coagulation, which can lead to bleeding after the slightest injury. Too much  and the blood becomes too thick.

"If our blood gets so thick that it forms thrombosis, or blood clots, in our brain we get a stroke. If the same thing happens in our heart it leads to a heart attack," says Kanse. 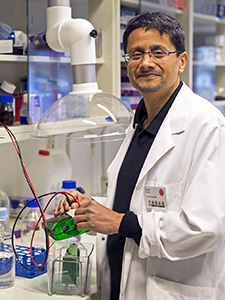 Learning more about the FSAP gene will be a long and difficult task, according to professor Sandip Kanse. Photo: Grunnar F. Lothe

During their research, two of the group’s PhD students found seemingly contradictory results.

A common way to learn about the properties of a gene is to study what it does in mice. By switching a specific gene on or off, researchers can determine the role it plays.

Saravanan Subramaniam, a PhD student in the group, did this with the FSAP gene. He then induced thrombosis by injuring the arteries of the mice. The animal studies are subject to strict regulations and the mice are under anasthesia during experiments.

It turned out that mice with the FSAP gene switched off, what the researchers call “knockout mice”, were far better protected against thrombosis.

"The findings gave hope that switching off the gene could be an effective prevention against stroke and heart attack," Kanse says.

Unfortunately it wasn’t that easy.

The findings of another PhD student, Amit Joshi, put the FSAP gene in a far more favorable light.

In the second study, stroke was induced in mice where the FSAP gene was turned off. Surprisingly, mice with the gene turned off suffered far more severe strokes.

"It turned out that the FSAP protein has another important role – it protects the brain against cell death," says Kanse

During a stroke, brain cells in the affected area lose their supply of oxygen. This can cause the brain cells to die and also makes the production of signal substances in this region go haywire. The overstimulation causes cell death, what scientists call excitotoxicity.

This process is what the FSAP protein seems to counteract.

"This gives us a dilemma. One could give patients FSAP to treat stroke, but it would cause more thrombosis," Kanse explains.

So what can the researchers make of this perplexing information?

"That’s the big question. We might be able to separate the good part of FSAP from the bad part. If we are able to deactivate the parts that make FSAP dangerous, it might be used as a treatment for stroke."

To do that the researchers need to find out more about the structure of the FSAP protein in order to figure out where its good part and its bad part is. According to Kanse this work will be demanding, both in terms of time and money

"This is going to be a very long and a difficult task which is now in the hands of new PhD students in the lab."

After successfully defending their theses, Joshi and Subramaniam have continued their research at Stanford, USA and Mainz, Germany.