If the blood supply to your brain decreases, it can trigger Alzheimer’s disease. Scientists at UiO wanted to find out whether this leads to more or fewer blood vessels and what role one particular protein plays in such a process. 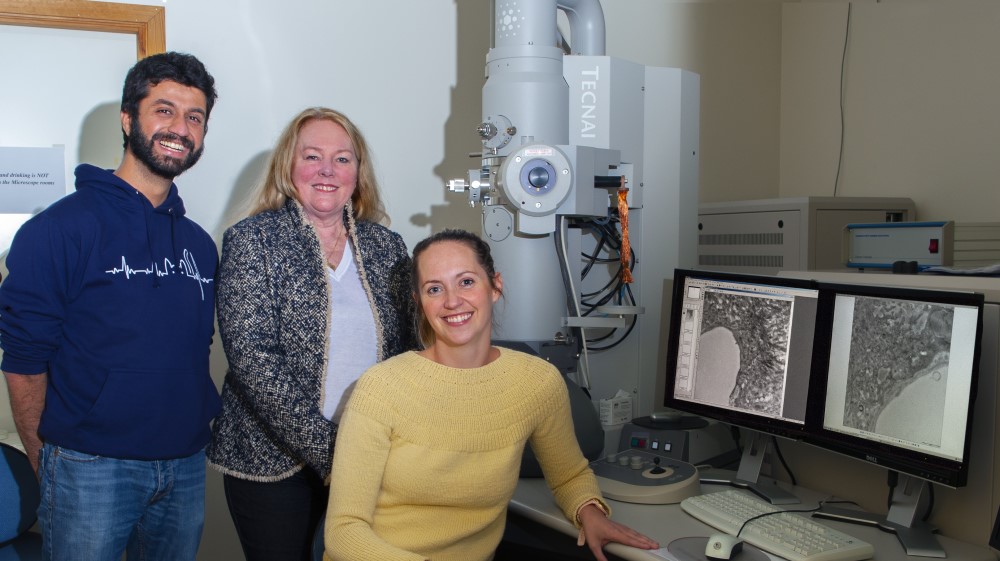 Earlier research has shown that several of the same risk factors behind the development of cardiovascular disease also can lead to Alzheimer’s. Pictured left to right: Shreyas B. Rao, Reidun Torp and Gry H.E. Syverstad Skaaraas. (Photo: Carina Knudsen, UiO)

About 100,000 Norwegians suffer from dementia. Many of them have Alzheimer’s. The blood flow in the brain changes with Alzheimer’s disease.

– Nerve cells are destroyed and this must have something to do with the blood supply. Blood carries both oxygen and nutrients to the cells. The disease begins to develop long before patients get any symptoms - changes occur over 10 to 12 years before you notice that anything is wrong, explains researcher and Associate Professor Reidun Torp at the Institute of Basic Medical Sciences.

She is interested in what is called “senile plaques” in the brain and how the brain rids itself of them. Plaque is a form of waste matter that comes from “incorrectly produced” proteins that build up as deposits in the brain.

– The essential key to discovering how to prevent Alzheimer’s disease is to find out how the brain handles this plaque before it is too late, she says.

Destroys nerve tissue in the brain

Torp and other researchers at the Department of Molecular Medicine have tried for many years to solve the puzzle of the various changes that occur in the brain. Their research represents stepping-stones on the way towards treating Alzheimer’s or preventing the disease.

One of the things Torp has studied is how particular proteinaceous fibres twist around each other in tangles and destroy brain cells.

– With Alzheimer’s, there is a connection between these two processes: the fibres that twist around each other and the senile plaque, which together result in the destruction of nerve tissue in the brain. They block the communication between nerve cells and disrupt the processes that nerve cells need to survive. We know a good deal about these two processes but this isn’t much help if we can’t stop it happening in the brain, she says.

Earlier research has shown that several of the same risk factors behind the development of cardiovascular disease also can lead to Alzheimer’s. In order to see the connection between the disease and the blood supply to the brain, the researchers wanted to find out whether the density of small blood vessels in the brain decreases, increases or remains unchanged in a patient with Alzheimer’s.

Her research team recently published an article in the Journal of Alzheimer’s Disease.

Two of the methods used by the researchers were various microscopy techniques and biochemical analyses. Research fellow Gry Syverstad Skaaraas is the lead author of the study.

–  We found that the density of blood vessels was unchanged in mice that had a lot of senile plaque, compared to mice without plaque, she says.

–  What we found instead was that the protein deposits from the plaque affected the walls of the blood vessels and changed their growth factors, which would indicate that the vessels no longer function as they should.

Growth factors are proteins that break down and form new blood vessels in the brain. We believe that it is this process that is disrupted in Alzheimer’s disease, says Torp.

Probably at a turning point towards finding a better treatment

According to the researchers, the study led to several new discoveries. One was that a type of cells called pericytes are destroyed by senile plaques in the blood vessels. Pericytes lie partly round the smallest blood vessels, allowing these to contract and regulate the blood stream in the brain.

Torp points out that a great deal of research is being carried out into Alzheimer’s and she can see a lot of positive signs.

–  I think we are at a turning point towards finding a better treatment, she says.