Believe it or not: your're a maths nerd!

Are you impressed when NASA manages to calculate the time and speed of a rocket’s trajectory? A new study shows that your brain has a “nerd centre” capable of even more complex calculations. 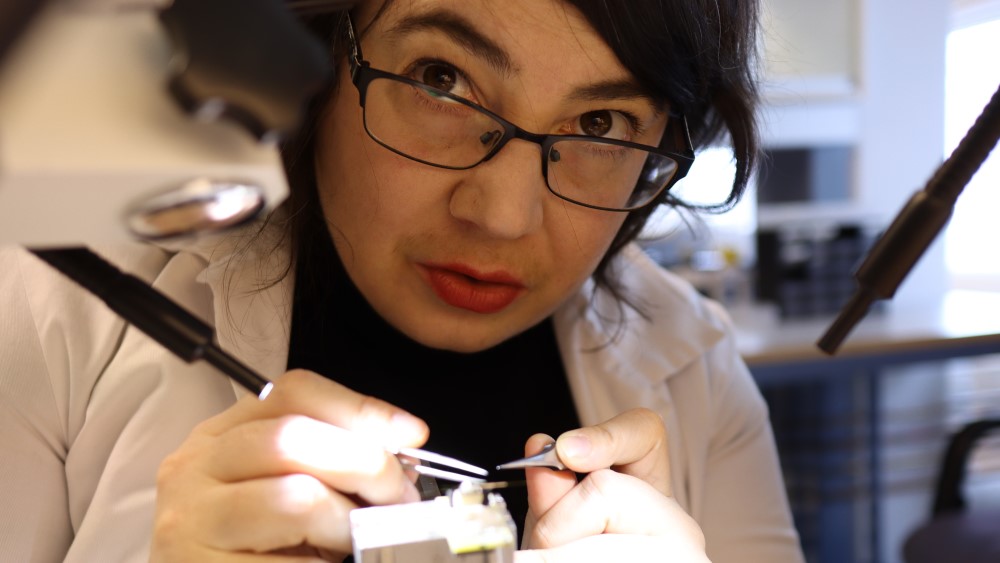 Researcher Charlotte Boccara at the University of Oslo found nerve cells that code for speed, position and direction all at once. (Photo: Ola Nordal)

If, late on your way to work, you see the bus coming and run to catch it while carrying your cup of coffee, you have probably “beaten” NASA. Nerve cells in your brain perform billions of complicated mathematical calculations to work out your speed, position and direction. For years, this ability of the brain to calculate such parameters has been a mystery.

After five years of research into the theory of “continuous attractor network” or CAN, Charlotte Boccara and her group of scientists have now made a breakthrough.

– We are the first to clearly establish that the human brain actually contains such “nerd cells” or “super calculators” put forward by the CAN theory. We found nerve cells that code for speed, position and direction all at once, reveals the researcher at the Institute of Basic Medical Sciences at the University of Oslo, now at the Centre for Molecular Medicine Norway (NCMM).

Boccara analysed 1400 nerve cells recorded in rats in a distributed manner across several brain areas. Together with PhD fellow Davide Spalla and researcher Alessandro Treves, she recently published an article in Nature Communications: “Angular and Linear Speed Cells in the Parahippocampal Circuits”.

– We equipped rats with small brain probes holding very thin electrodes that could read their brain activity. Afterwards, they were free to move around in a maze to search for goodies. We could follow their movements with a camera and thus correlate their actions with the activity of the many nerve cells we were recording from, explains Boccara.

Boccara’s research group used an advanced form of data analysis to thoroughly investigate what was happening in all the cortical layers of several brain areas. This involved systematic examination of vast datasets.

This new research is in the continuation of the ground breaking work of John O’Keefe, May-Britt and Edvard Moser (Nobel Prize in Medicine 2014) which show that individual nerve cells can code for a navigation coordinate system – the brain’s GPS system.

The CAN theory that Boccara studies had been widely popular among scientists for decades. In a nutshell, it proposes that when we move around, our mental map or representation of the place in which we find ourselves, constantly updates itself according to our new position.

The CAN theory hypothesises that a hidden layer of nerve cells perform complex maths and compile vast amounts of information about speed, position and direction. Just as NASA’s scientists do when they are adjusting a rocket trajectory.

– Previously, the existence of the hidden layer was only a theory for which no clear proof existed. Now we have succeeded in finding robust evidence for the actual existence of such a “brain’s nerd centre”, says the researcher, and as such we fill in a piece of the puzzle that was missing. (The article continues after the picture).

The area where Boccara and her team found this hidden layer is precisely the part of the brain that is first impaired at the onset of Alzheimer’s disease.

– Our findings are important because these cells tell us where we are and how we are moving. If they stop working, one gets lost, explains Boccara. To understand the inner mechanisms of brain coding can later be applied for developing new therapeutics.

Do the nerve cells perform a number of tasks?

Why are the nerve cells discovered by Boccara spread over different parts of the brain? And can they perhaps perform several different tasks?

– Here we have a number of theories: do some cells function as a back-up, or do they perform separate calculations, i.e. do some cells plan while others react to previous experiences? she asks.

At all times, the brain is bombarded with sensory experiences (sight, feelings, hearing). It must make sense of this chaos to create an image coherent with memories of similar situations previously experienced in order to adjust one’s actions.

For example, I see that the bus is coming, I can feel that the coffee is hot, at which speed can I run to reach the bus without burning myself?

The last years, the research community has proven that the brain areas Boccara is interested in is involved in many more tasks beyond mapping spatial position. The nerve cells there can also map sounds and rewards. Now she wonders whether the cells they found are capable of performing other tasks, in addition to calculating speed and direction.

– But how such phenomena are perceived changes depending on the experiences you have. For instance, the way you perceive the name Ola will change significantly if you meet an Ola who becomes your partner. The process of categorisation must therefore be updated as time goes on and the nerd centre may also be involved in this process. This is an interesting field for further research, says Boccara.

Boccara now wants to find out how bad sleep affects the nerd cells’ ability to calculate.

– I am wondering whether the reason why the brain works more slowly when we have had too little sleep has something to do with abnormal activity in these cells, she says.

Whatever the answer, the next time you claim that you are “really bad at maths”, it is not really true!

Boccara’s project was funded by the EU’s Marie Sklodowska-Curie Actions programme and the Research Council of Norway’s Researcher Project for Young Talents. She was just appointed as a group leader at NCMM.

Angular and Linear Speed Cells in the Parahippocampal Circuits