Studied dizziness and developed a new method for use worldwide

The room around you sways up and down and you feel seasick. While searching for the cause of dizziness, scientists at UiO have developed a new method for spinning things under a microscope and registering the activity in brain cells in movement. 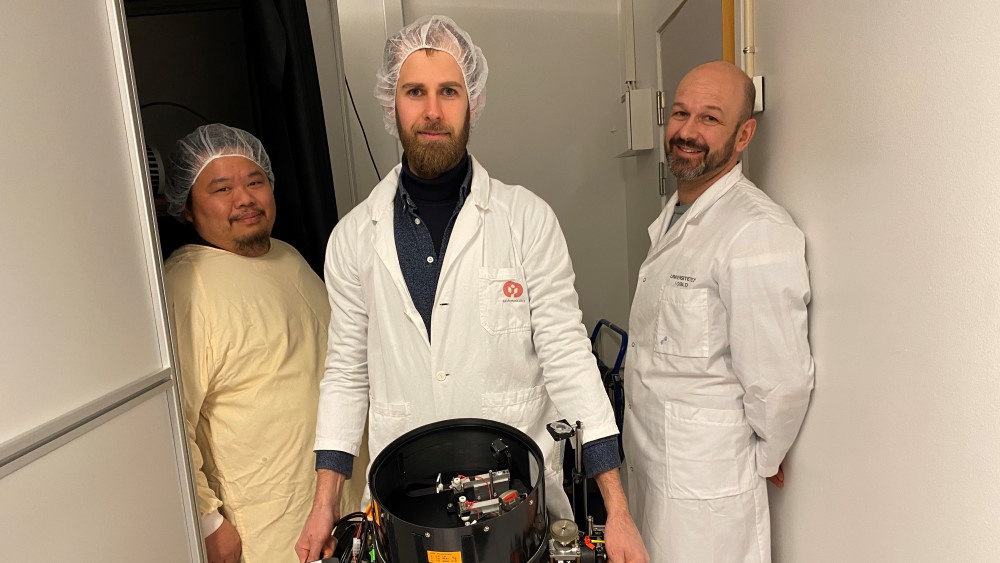 Associate Professor Koen Vervaeke (to the right), research fellow Eivind Hennestad (in the middle) and Aree Witoelar converted the hardware in optical instruments to come up with their new method. (Photo: Cecilie Bakken Høstmark, UiO).

Most of us have felt dizzy at one time or another. For many, the sensation rapidly disappears, but not everyone is that fortunate. Nearly one in ten Norwegians suffer long bouts of dizziness. For the over 65s, the number increases to one in three.

Our sense of balance differs from our other five senses in that we do not notice it as long as it is functioning normally.

– When you feel dizzy, there is something wrong either with the balance organ in your ears or in the areas of the brain that register the movements of the head. The challenge is that we do not know enough about how dizziness occurs, says researcher Koen Vervaeke.

Together with research fellow Eivind Hennestad and several other in the Neural Computation Group at the Institute of Basic Medical Sciences at the University of Oslo, the scientists have been working to find out more about this mystery.

The first problem they had to solve was to map how brain cells in different areas of the cerebral cortex register information coming from the balance organs.

– We needed to be able to study the cells while they were moving in order to see the signals that arise when the head is turning. How could we succeed in generating sharp images and videos, since we were dependent on a laser microscope? says Vervaeke.

It was research fellow Eivind Hennestad who first suggested that they should try to adjust the equipment they were using while a mouse was turned round under the microscope. They also had to make it work while they turned the mouse’s surroundings and the mouse itself was still. Vervaeke’s first reaction was that “this will never work”. But he gave Hennestad a few months to test out his ideas.

Drew up a map showing how brain cells are activated

Now, two years later, they have developed a method that will probably be implemented worldwide.

– We solved the problem by converting the hardware in optical instruments. Scientists at the Massachusetts Institute of Technology (MIT) in USA had earlier discovered another method, but this involved correcting the images by means of software. Our method solves the problem in the best and most accurate way. MIT is a major research institution while IMB is small - but we managed it nevertheless by being patient and persistent, Hennestad and Vervaeke explain.

The new method was described in a recently published article in Cell Reports: «Mapping vestibular and visual contributions to angular head velocity tuning in the cortex».

When people feel dizzy, it may be due to both images from the eye and disturbances in the inner ear. The scientists had to take measurements from many areas of the brain in order to find out how brain cells in the various areas react to visual and balance-related impressions.

For the very first time, they succeeded in producing a «map» of these reactions.

Discovering how our brain keeps control of our head movements is not only important for understanding dizziness, but also Alzheimer’s disease.

About 60,000 Norwegians suffer from Alzheimer’s, a disease that affects many of the same parts of the brain that have been mapped in this research study. In this way, our findings provide new information that can help to solve several medical conditions, emphasises the scientist.