We should use more of the fish for human consumption

In Norway, a third of the fish we produce is used for animal feed. This could better be used for human consumption, providing more vitamin B12 and selenium, a new study shows. 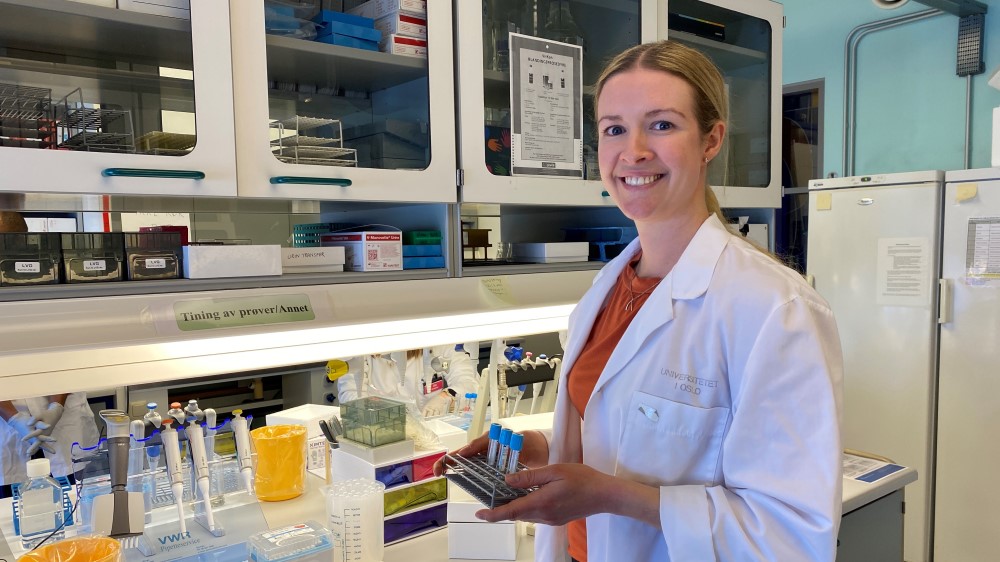 Would you eat bread made with fish meal? Research fellow Kristin Solheim Hustad at the Department of Nutrition at the University of Oslo does research on using more of the fish for human consumption. (Photo: Cecilie Bakken Høstmark, UiO)

– Shouldn’t we use more of the fish we already produce for human consumption? asked research fellow Kristin Solheim Hustad and her colleagues at the University of Oslo’s Department of Nutrition. They looked at several of the United Nation’s 17  sustainable development goals, for example better nutrition, food security and ending hunger. The goals also state that it is important to preserve and use the oceans and marine resources in a sustainable way.

The scientists wanted to find out whether fish meal made from salmon waste could affect vitamin and mineral levels in the blood. Participants in their study were asked to take ten capsules three times a day for eight weeks. Half the participants were given capsules containing fish meal from salmon and half were given only a placebo.

– The level of vitamin B12 and selenium in the blood of participants who took capsules containing fish meal increased significantly compared to that of the placebo group. We also looked at other substances such as vitamin D, omega 3, folate (vitamin B9) and zinc, but we found no change in the level of these, says Hustad.

Their study was recently published in the European Journal of Nutrition.

When asked whether people could rather just eat fish filets instead, Hustad referred to another study, where the participants did eat fish filets and also achieved higher levels of vitamin B12 and selenium in their blood. However, they had to eat a great deal more fish, compared to taking the capsules.

In recent years, there has been a good deal of focus on environmental toxins found in fish. But Hustad can put our minds at rest on this account:

– The contents of the fish meal did not exceed the tolerable levels of the toxic substances we studied, including mercury, dioxins and dioxin-like PCBs, she says.

Many of us have a low intake of selenium

The research fellow explains that the study is important because 40 % of Norwegian pregnant women have a too low intake of selenium. Sources of selenium and B12 are meat, fish, seafood, eggs and dairy products. In addition, cereals and certain kinds of nuts can provide us with selenium.

– The amount of selenium in our food depends on the contents of the soil that the food is produced in. In Europe, the soil has a low content of selenium, which means that Norwegians are particularly susceptible to selenium deficiency. We don’t know how large a proportion of the population has a B12 deficiency, but the proportion increases with age, she explains.

Fish meal can be used in several ways.

– You can add fish meal to the dough when baking bread. In one study, the participants said they liked the bread as much, or better, than bread without fish meal. Furthermore, the bread containing fish meal had a higher content of protein, essential fatty acids and minerals, but was lower in carbohydrates.

Salmon doesn’t have such a strong smell

When asked whether the bread smells strongly of fish, she replies:

– Fish meal made from salmon will not smell as strongly as that made from cod, for example. This is because salmon contains only a small amount of trimethylamine, the substance that produces the strong smell of fish.

If we use more of fish for human consumption, that will lead to a lack of food elsewhere. What will happen to the animals that depend on feed derived from fish?

– Animals must of course be given food that keeps them healthy. They can, for example, be given plant-based feed or animal-based feed using ingredients sourced from lower down the food chain. Research is currently also being carried out on the use of insect meal, says Hustad.

The study was a collaborative project between the University of Oslo, the research organisation Møreforskning in Ålesund and MOWI, which is a Norwegian producer of farmed salmon. The study was financed by the Norwegian Seafood Research Fund.