Stenmark receives the award for his groundbreaking research on processes in cell membranes and how misregulation of such processes affects the development of cancer. 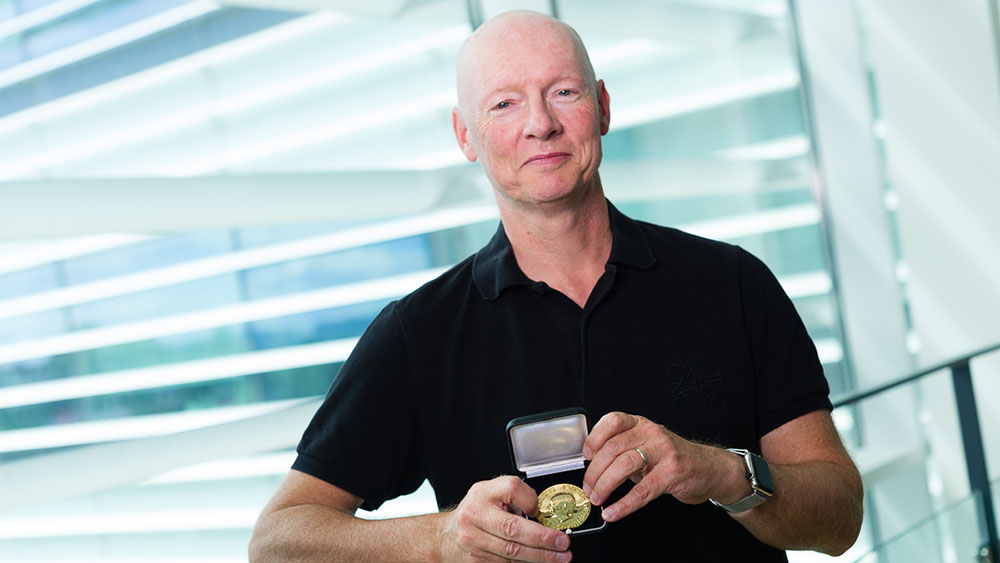 Professor Harald Stenmark is awarded the 2022 Anders Jahre Award for Medical Research. The medal shown on the image belongs to UiO. Stenmark and the other prize winners will receive their own medals during the Award Ceremony in November. Image: Øystein Horgmo, UiO

Anders Jahre's Awards for Medical Research honour research of outstanding quality in basic and clinical medicine. The prizes are awarded by the University of Oslo and are among the largest within Nordic biomedical research.

The 2022 Award Ceremony takes place at the University Aula on Thursday 3 November at 6 pm.

Rector Stølen congratulates the prize winners on behalf of UiO

– The University of Oslo congratulates the three prize winners on receiving this important and prestigious Nordic medicine award. Professor Stenmark, Lecturer Sylow and Lecturer Wiuff Andersen have made an impressive effort in their fields. Their research results will be of great importance for the prevention and treatment of diseases that affect many people, Svein Stølen, Rector of the University of Oslo, says.

The Anders Jahre Award for Medical Research awarded to Stenmark

Professor Harald Stenmark receives the award for his groundbreaking research on processes in cell membranes and how misregulation of such processes affects the development of cancer.

Each cell in the body is surrounded by a cell membrane, which is  made up of fats and proteins. Inside the cell there are many different components that are also enclosed by membranes.

Previous cancer research has focused little on membranes. Stenmark and his colleagues have investigated how changes in the cell's membrane systems can contribute to the development of cancer. Among other things, they have revealed how changes in the cell's membranes can contribute to DNA damage and increased invasiveness, which promote cancer progression.

They have also found that some of the proteins that regulate cellular membranes, can be promising targets for cancer treatment.

– It feels like a great honour to receive this award, especially when you look at the list of previous prize winners. It is gratifying that the award committee values the importance of basic cell biological cancer research in our efforts to improve future cancer treatment, says Stenmark.

The Faculty management, by Dean Ivar Prydz Gladhaug and Head of Department Dag Kvale, congratulate Stenmark warmly. They agree that this year's award goes to one of the Faculty's most profiled and renowned researchers. They both believe that the award is very well deserved.

Rector Svein Stølen comments the following about the awarding of the prize to Stenmark:

– As the University’s Rector, I am especially proud that the Anders Jahre Award for Medical Research goes to one of our own researchers this year. Professor Harald Stenmark leads the Centre for Cancer Cell Reprogramming (CanCell), a Norwegian Centre of Excellence here at the University of Oslo. Through his work, he has so far contributed to several groundbreaking discoveries. Stenmark is an eminent and highly respected researcher, and we are happy to have him as an employee.

Associate Professor Lykke Sylow receives the award for her outstanding research on molecular metabolic causes for loss of muscle mass in cancer and type 2 diabetes. Sylow has studied how the hormone insulin and exercise regulate muscle mass and the turnover of sugar in the body. The molecular insight from her research has, among other things, provided a better understanding of the connection between insensitivity to insulin and loss of muscle mass.

– It is a true honour for me to receive this award. I thank the Anders Jahre Selection Committee for this tremendous encouragement. I am forever grateful for my mentors and research team whose support made it possible, Sylow says.

– I am very honoured to receive the Anders Jahre’s Award for Medical Research 2022 for young researchers. This prize will help me and my colleagues to continue our research related to cardiac arrest,” Wiuff Andersen says.