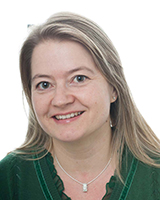 Mechanisms of DNA and RNA quality control in human disease.

We are interested in the quality control mechanisms that maintain function of DNA and RNA throughout the lifetime of cells and organisms.

DNA repair enzymes remove damaged or inappropriate bases from DNA. Historically, studies of DNA repair has been motivated by the need for these mechanisms in order to prevent mutations - changes in the genetic code. Studies of DNA repair is therefore important in order to understand how cancer develops and how cancer can be treated. In recent years it has become clear that DNA repair enzymes have many important functions in cells other than to prevent mutations, most importantly in neurobiology to prevent neurodegenerative diseases. We have also recently demonstrated that some DNA repair proteins also contribute to RNA quality control.